This Saturday, the UFC hosts two shows in one day. The first is UFC Belfast, which… 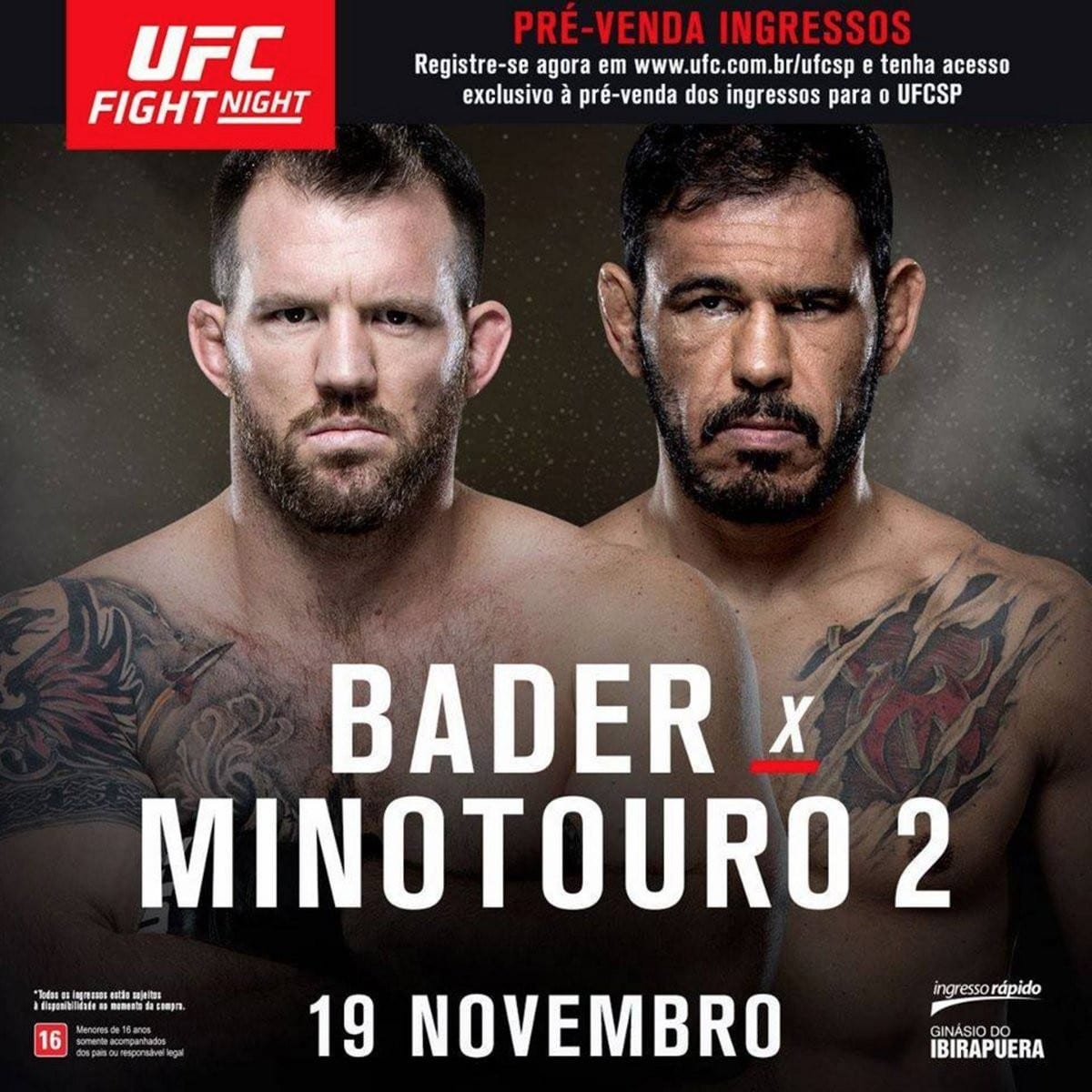 This Saturday, the UFC hosts two shows in one day. The first is UFC Belfast, which takes place early in the morning, before being followed by UFC Fight Night 100 from Sao Paulo, Brazil.

In the main event is Ryan Bader vs. Antônio Rogério Nogueira — a rematch of their 2010 bout at UFC 119.

While Lil’ Nog looked good in his previous outing against Patrick Cummins, and managed to get his first finish since 2011, it remains to be seen if he can compete against the higher echelon of the division — and with losses against the likes of Shogun Rua, Phil Davis and Anthony Johnson, it seems unlikely.

Add in to the equation Bader’s performance of the night showing against Ilir Latifi last time out, and you have a recipe for the American to stroll into free agency with his second victory over the ageing Brazilian legend Nogueira.

In the co-main we have Thomas Almeida and unranked Albert Morales.

Of all the fights on the main card, this could well be the easiest to predict. Despite Almeida’s tentative showing and subsequent loss to Cody Garbrandt, he remains one of the real talents in the bantamweight division. Morales on the other hand is mostly unproven, and with only 7 fights to Almeida’s 21.

In a sport where they’re rare, it can sometimes be hard to spot a tune up fight, but that’s what this co-main event is, and look for Almeida to take advantage of the opportunity at an easy return after his first loss with a dominant performance.

Next up is Claudia Gadelha vs. Cortney Casey.

While Casey is relatively unheard of, this may not be the tune up fight that the co-main event is. Casey’s a striker, although has shown an ability to submit her opponents. She has been awarded two fight of the night bonuses. While she’s unranked at women’s bantamweight, she could be a real test for any of her fellow fighters.

That being said, she’s going up against arguably the only person who has a shot of defeating champion Joanna Jedrzejczyk in Claudia Gadelha. While Gadelha’s recently public camp change could hint towards some uncertainty and disruption in her personal life, it’s likely her natural talent and ability will be able to overcome any gameness in her opponent.

Leading up to that is #11 ranked middleweight Thales Leites, who returns from his Submission victory over Chris Camozzi. He faces unranked Krzysztof Jotko, who makes his seventh appearance in the UFC, and rides a four fight win streak. While Leites could well be a jump up in competition too far, it certainly feels the momentum could be with Jotko, and him grinding out a decision win wouldn’t be the strangest thing in the world.

Elsewhere, we have Warlley Alves attempting to bounce back from his first loss as he faces Kamaru Usman, who hasn’t lost in his last seven. Alves will be looking to nullify the heavy hitting from Usman, but it’s likely that the man with the momentum will get the victory, as Usman uses his superior striking to get the win.

Lastly, opening the card will be Brazilian native Sergio Moraes and Zak Ottow. Ottow lost his UFC debut, and this likely represents a must-win for the American. Unfortunately for him then, that he faces the more experienced Moraes — who we’re picking to get the victory.

The UFC Fight Night 100 main card begins at 9PM/6PM ETP. You can watch it on Fox Sports 1.