Tyron Woodley on race: “As uncomfortable as it is, we need to discuss it and we need to talk about it”
Press enter to begin your search
MMASports

Tyron Woodley on race: “As uncomfortable as it is, we need to discuss it and we need to talk about it”

Tyron Woodley’s week has been a hectic one. The UFC welterweight champion garnered… 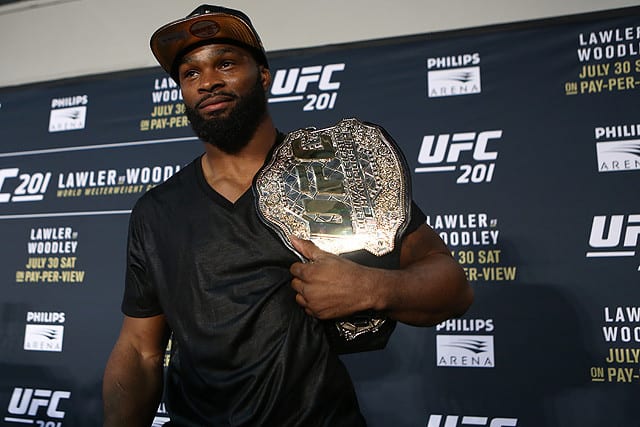 Tyron Woodley’s week has been a hectic one.

The UFC welterweight champion garnered plenty of attention early last week when he appeared on ESPN and announced that he felt treated differently due to the colour of his skin. And, as always with the topic of race, it was met with a mixed and passionate reaction.

Today, Woodley appeared on MMAFighting’s The MMA Hour to go further in depth on the topic and what exactly he considered to be an issue that’s gone too long undiscussed.

“When you say I’m a freak athlete, does that mean I don’t work hard, that I’m going to fade in the later rounds? That I don’t have great cardio, that I don’t have a great skill set? It comes off to me[…]it almost sounds barbaric, like ‘hey, you’re strong, you knock people out, but if it gets to the later rounds you might get tired, you might fade and all those muscles come at a cost’.”

While Woodley was hesitant to provide examples or names regarding backstage interactions or cases with known personalities, he did state that he felt the issue was not just with mixed martial arts fans, and instead was an indication of the greater picture in America and the increasing attention on MMA.

As MMA has risen in notoriety, more of the American public with ingrained racial biases have started following the sport, Woodley says, and as such the issue is more prominent than before.

“So those fans have come over and brought that same ideology into our sport. They look at the African American athletes.. and not only the fans, the judges,” Woodley said. “You might have a judge that can be looking at me and waiting for me to fatigue. Waiting on me retire. I’ve listened to people broadcast my fights, [when] I completely steamrolled Carlos Condit in the first round, and the broadcast says ‘lets watch the technique of Carlos Condit and the cardio of Tyron Woodley’.

“Why would you paint that picture when I completely dominated the individual in the round, why wouldn’t you watch the butt-whipping I just put on my man, and see if [I] can do it again in the second and third round.

“The perception is there. I think it’s indirect most times, but sometimes it’s blatant.”

“When you say ‘hey Tyron, I knew you in college, you were a freakish athlete’, no I wasn’t a damn freakish athlete. I was a hard worker. I was dedicated. I had a strong skill set, I had a strong will, I had a strong mindset and I wouldn’t take no for an answer. That’s why I was a great athlete, not because I had this extra calve muscle, and I was extra strong because I was African American. That’s a slap in my face. I have an issue with that, when people say ‘watch Tyron in the later rounds’.”

One particular comment that Woodley made last week that particularly divided fans, was that he felt he was the ‘worst treated champion in the history of the UFC’. Particularly, he had stated, that he had an issue with how Thompson was promoted ahead of their first bout at UFC 205.

In order to emphasise that he wasn’t merely being sensitive, Woodley shared a personal anecdote with a friend who works for the promotion.

“I had a photographer that was shooting me for a fight,” Woodley said. “And he came to me, as a friend, and said ‘Tyron, I think you need to ease up a little bit, you’re going a bit hard in the paint. Maybe you should back up a little bit with some of the statements, and maybe if you were a little softer, you would get more endorsements[…]You don’t want to have this stance or you’re gonna put a flag on yourself’.

While Woodley’s opening up doesn’t mean the matter of race in sports is any closer to disappearing, the champion should be commended (regardless on your opinion of his arguments) for discussing a topic that is known to be exceptionally divisive.

And, no matter what issues he feels he may have faced and to push through, Woodley stated he fully intended to take motivation from the entire saga and defend his belt in order to remain champion for the rest of his career.