Three fighters miss weight for UFC Portland; including in the main event and co-main event
Press enter to begin your search
MMASports

Three fighters miss weight for UFC Portland; including in the main event and co-main event

Early weigh-ins may have their upsides, but they still don’t come without complications…. 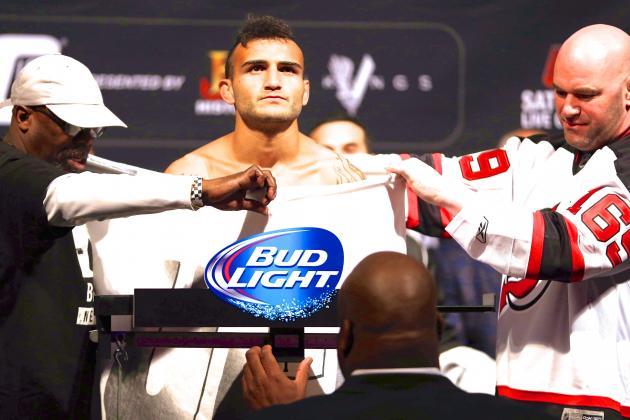 Early weigh-ins may have their upsides, but they still don’t come without complications.

The first, and most egregious miss of the trio belonged to John Lineker, who faces John Dodson in the card’s main event. It marks the fifth time Lineker has missed weight in his career, the most ever by a UFC fighter. No one else has exceeded three.

The fight was supposed to take place at 135-pounds, a division the Brazilian originally moved up to because of consistent weight struggles. Lineker waited until the last possible moment, but still hit the scales at 136.5-pounds.

The second weight failure went to Alex “Cowboy”Oliveira, who fights in the co-main event. Missing weight by 5.5-pounds, Oliveira came in at 161.5-pounds.

He had about half an hour left to continue attempting to shred the weight, but clearly elected to forgo the process and surrender 20% of his fight purse, which will now go to his opponent Will Brooks.

Brooks, the former Bellator lightweight champion, took to Twitter (from a sauna!) to vocalise his displeasure.

“I take this serious,” Brooks said. “I’m not in the business of not doing my job. My wife and my daughter can’t afford for me to miss weight. Can’t afford for the commission to try and take 20% of my paycheck. This is profession, this is your job. Be a professional, make weight.

“This is my problem with guys now, dudes don’t get this. It’s entertainment, but it’s also a profession, this is serious business.”

The other fighter to miss weight was Hacran Dias, who faces hard hitting up-and-comer Andre Fili on the cards preliminary bouts. Dias weighed in at 148.5-pounds, two and half heavier than he permitted.

The full weigh in results for UFC Portland are as follows: