The UFC confirm a March 2017 return to London 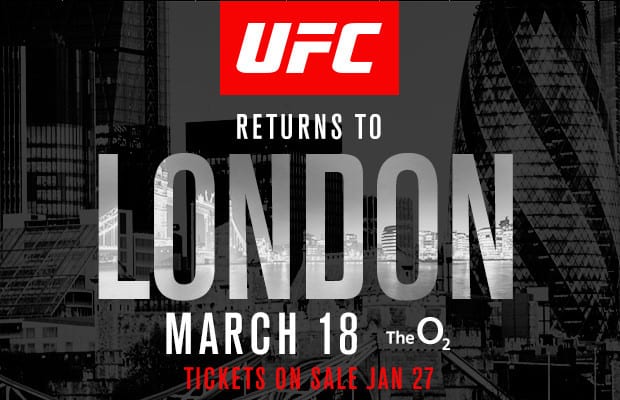 The UFC have officially confirmed that the promotion will be returning to London in 2017 on March 18th.

The event is scheduled to once again take place in the 02 Arena, London, and the tickets are set to go on sale on January 27th via Ticketmaster and AXS, with Fight Club pre-sale starting on the 25th, and the Newsletter pre-sale beginning on the 26th.

This will be the second successive year the promotion will run a card in London, following Michael Bisping’s famous victory over Anderson Silva back in February.

No fights have been confirmed as of yet for the card.

Vice President and General Manager of UFC EMEA, James Elliot, has said that “the UK, and in particular London, is an incredibly important market for us. Time and time again we return to the UK and we are blown away by the enthusiasm and support from the fans.

“Never has there been a better time for mixed martial arts in this region. The UK has its first ever world champion and we have an extremely exciting pool of talented young British athletes looking to make names for themselves on the international stage. What better way to kick off 2017 than with a return to The O2 in London?”