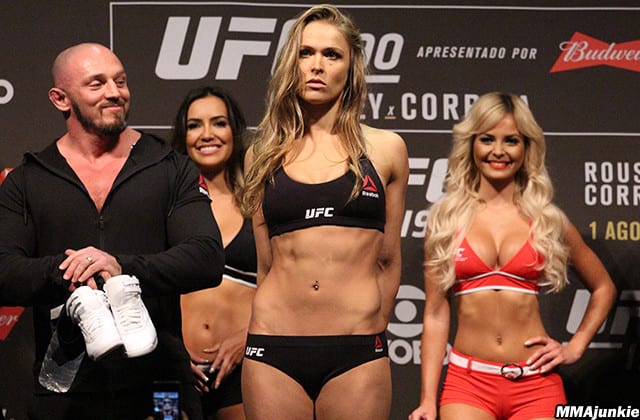 It has been another day of high drama on the scales on the eve of a UFC event.

For the second fight in succession, Johny Hendricks has failed to make the non-title welterweight limit of 171 pounds for Friday’s out with Neil Magny and, as a result, the former welterweight champion will forfeit 20% of his purse to his opponent.

In addition to Hendricks, Ray Borg weight in at 128 pounds for his flyweight contest with Louis Smolka — two pounds over the non-title weight limit of 126-pounds. Borg forfeits 30% of his purse.

While the official weigh-ins took place in the T-Mobile Arena in Las Vegas earlier today, as is tradition, the ceremonial weigh-ins will take place at 11pm GMT (6PM ET/3PM PT) where we will (presumably, at least) catch the first glimpse of a face off between UFC 207 headliners Ronda Rousey and Amanda Nunes.

You can watch the ceremonial weigh-ins in full below.