Today, the UFC announced the introduction of a new division, and at UFC… 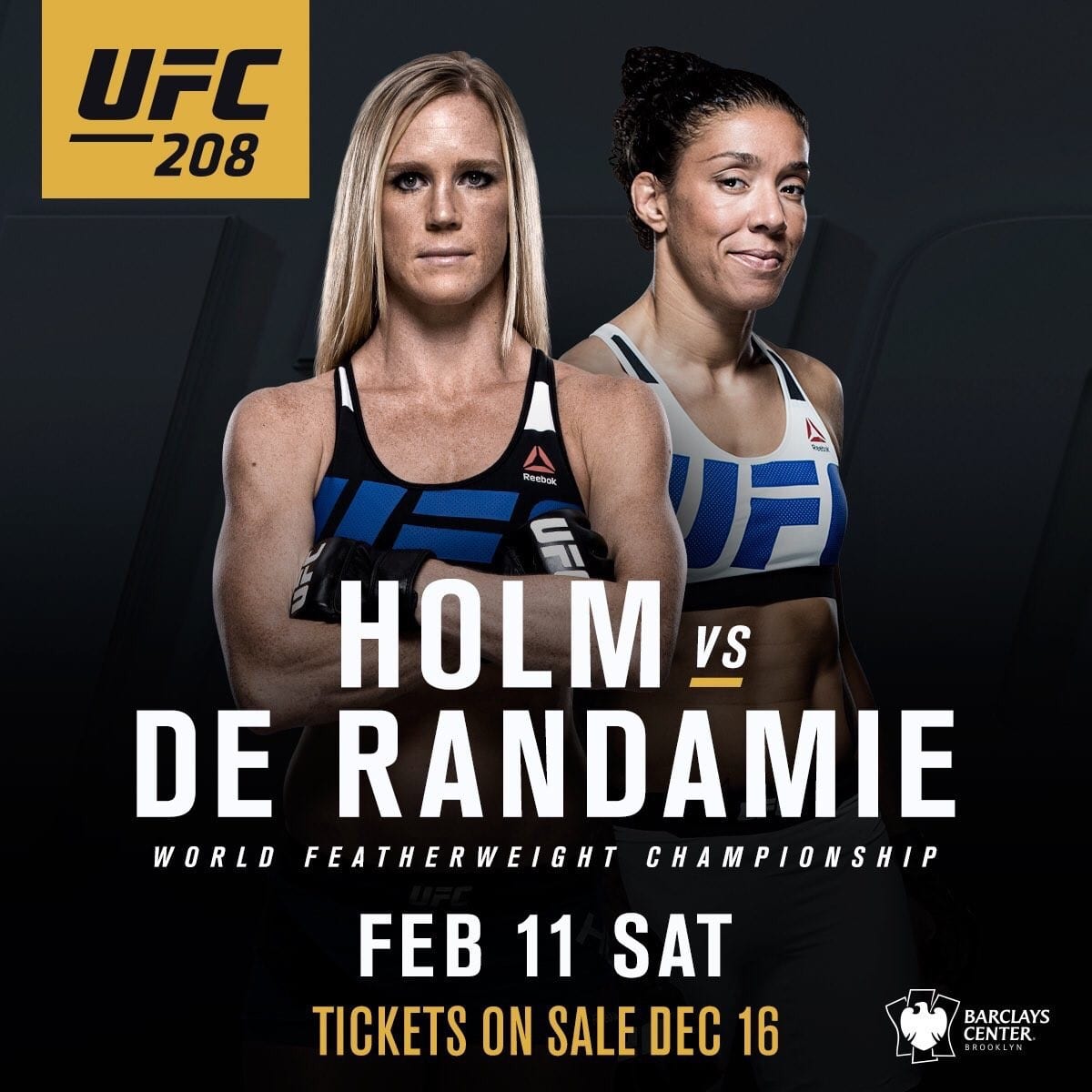 Today, the UFC announced the introduction of a new division, and at UFC 208, Holly Holm will face Germaine de Randamie for the new woman’s featherweight title belt.

The news confirms comments made by UFC President Dana White last week, where he said that the UFC would indeed be bringing in a larger weight class for women.

There is of course, something of an asterisk here next to the announcement.

Cris Cyborg, widely regarded as the world’s best woman’s featherweight — if not the best woman’s fighter period, has long been arguing with the UFC to have a weight class suited to her size created. The back and forth between her and the promotion has been a prolonged — and public — affair, and so to see the 145-pound division beginning without Cyborg involved is something of a surprise.

According to White, the UFC had approached the Brazilian with the idea of the new division, only for her to turn down the bouts due to feeling she needed longer to recover from her most recent devastating weight cut.

As such Cyborg, who became a U.S. citizen today, reacted to the news in the manner in which you’d expect.

“I’m happy the UFC created my division,” Cyborg said, speaking with MMAFighting. “It’s been 11 years I’m fighting for women to have the same rights as men with several divisions.

“Everybody knows I’m the featherweight champion. I’m undefeated for 10 years in my division. They put this belt only to sell the fight for the new MMA fans. For an example, Holly is coming off two consecutive losses and will fight for the belt. The real fight fans know what’s real.”

The worst part is I fought for the division. I didn't turn down I title fight I asked for a march date. 10 years no division and no respect

One of the biggest roadblocks in front of a UFC woman’s featherweight division has been the lack of 145-pound talent in the MMA scene. Clearly, the UFC has finally come around to the idea that the introduction of the weight class will inevitably breed new talent.

Until that talent surfaces though, Cyborg will always be near the top of the pile, and it would be surprising to imagine a scenario where she doesn’t face the winner of Holm vs. de Randamie.

Speaking to ESPN.com, Dana White made no bones about the exclusion of Cyborg and made mention of the upcoming Ronda Rousey return.

Should she win her bout against women’s bantamweight champion Amanda Nunes, and Holm defeated de Rendamie, then suddenly the UFC would have an opportunity to not only hold a megabucks rematch between the two, but it would be billed as champion vs. champion.

“We offered three fights and she turned them all down,” White said about Cyborg to ESPN. “This is a business. I had two girls who wanted to fight for the 145-pound title. This is the pros. If you play for the Patriots, you don’t sit around and say, ‘I don’t feel like playing this weekend.’

“We brought her in because she said she could make 135 pounds. When she couldn’t, the weight cut was too hard, we created the 145-pound division — and she still doesn’t want to fight.

“This is a business of a opportunity. When opportunity arises, you jump up and take it. If you don’t, the bus is gone and it passes you by. If Holly wins and becomes a champion, and that’s the scenario [Rousey regains the title]? I guarantee people will want to see it.”