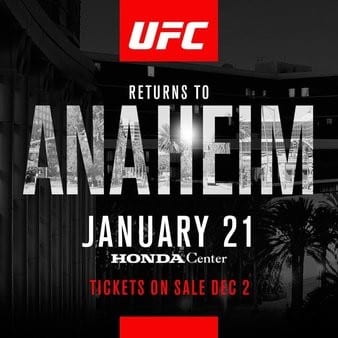 With UFC 206 facing criticism for being a pay-per-view with a weakly strengthened card, today the UFC have announced that their January 21 event UFC 208 has been cancelled.

In a brief comment on their website, the UFC stated: “UFC® announced today that its January 21 Pay-Per-View event at Honda Center in Anaheim, California has been rescheduled to August 5. The event will remain a Pay-Per-View broadcast. UFC 208 will be shifted to the February 11 event at Barclays Center in Brooklyn, New York.

To be clear, that means that what was originally UFC 209 (taking place in Brooklyn, New York) will now be listed as UFC 208.

While there is no official reason for the event calendar restructure, it seems likely that the UFC were unable to find a pay-per-view worthy main event.

It had seemed the promotion had been targeting Michael Bisping vs. Yoel Romero, but with Bisping requiring time away, it couldn’t be made.