Nick Diaz: “I’m going to fuck your whole world up right in front of your nice wife and your nice life”
Press enter to begin your search
MMA

Nick Diaz: “I’m going to fuck your whole world up right in front of your nice wife and your nice life”

Nick Diaz isn’t heard from often, but when he decides to speak up, he… 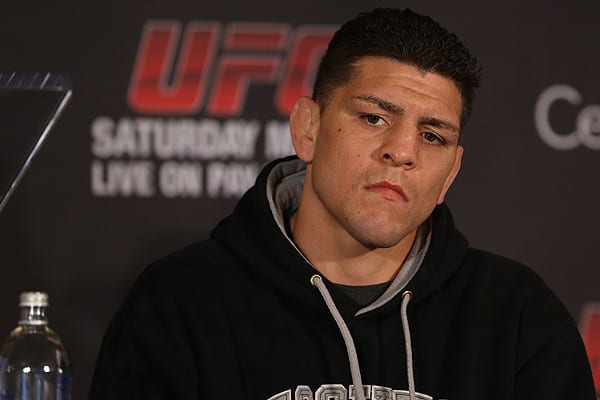 Nick Diaz isn’t heard from often, but when he decides to speak up, he has plenty to say.

Today the older Diaz brother appeared on Opie radio in New York, where he and his brother Nate were in attendance for UFC 205 — despite not getting given tickets by the promotion. Although Nate was relatively outspoke about the ticket snub, feeling it had something to do with the UFC wanting the focus to remain on McGregor’s historic title win, Nick was far less unaffected.

“They’ve been funny about letting me into these events lately,” he said simply.

The Stockton group and team McGregor had several altercations in the lead up to the fight at UFC 202, including the now infamous bottle throwing incident. But even with talks of a third fight between his brother and the Irishman circulating, Nick doesn’t feel as if the rivalry is as heated as it once was.

“By the time you’re done with five rounds you’ve probably spent everything you had,” he said. “It’s like a weird camaraderie, it really doesn’t mean anything. It’s like good fight, I hate you, but good fight.”

We haven’t heard much from Nick since his suspension from the Nevada State Athletic Commission was issued last year.

While there was a brief moment where it looked as if he was nearing a return to the limelight after that punishment ended, and UFC President Dana White stating that they were attempting to organise a fight for him, Nick has remained mostly silent in the public eye.

Perhaps it shouldn’t be too strange. Diaz has long maintained that he’s never enjoyed his chosen career, and has frequently vocalised that he fights purely for money. Because of that, he’s always had a fascinating perspective on the entire sport, and often mentions the false bravado he encounters.

Yet despite his seeming reluctance to step in the cage, Nick has been one of the most popular fighters in the sport for some time, with fans enjoying his brash personality and almost unwavering aggression. Diaz knows he’s popular too, and it long made him angry when he saw his colleagues getting more opportunities than he felt he received.

“I used to get real mad when people would understand things that I didn’t understand,” he explained. “[People making] more money, or end up on a Wheaties box. I was like ‘what the fuck? I’ll whoop your ass’. I’m light-years ahead of people.”

One thing that Diaz feels put him “light-years” ahead of fighters is a dedication to the sport that others can’t match. For example, he feels that if you don’t live a spartan lifestyle and split time between training and family, then you simply won’t be able to reach your full potential.

“Sorry I’m not a good role model for your children, they never gave me the opportunity to be,” he said. “So here Georges is, this big role-model and sports athletic endorsement guy, and he starts talking shit: ‘Nick Diaz is a bad guy, Nick Diaz deserves to get beat down’, I’m starting to feel some type of way about this now.

“I wanna be on a Wheaties box, I wanna get paid for some fucking endorsements. I want [the UFC] to want me to win the UFC title, they don’t want me in that position.”

Having said all that, ignoring the mild feeling of bitterness about not making as much money as he could have (and since learned he missed out on), Diaz isn’t exactly burning with the same jealousy he once was.

“I don’t care anymore. I negotiated pay-per-view [points] into my contract without a title. I’m the first one to ever do that, and these motherfuckers are all pointing the finger at me and calling me stupid this whole time.”