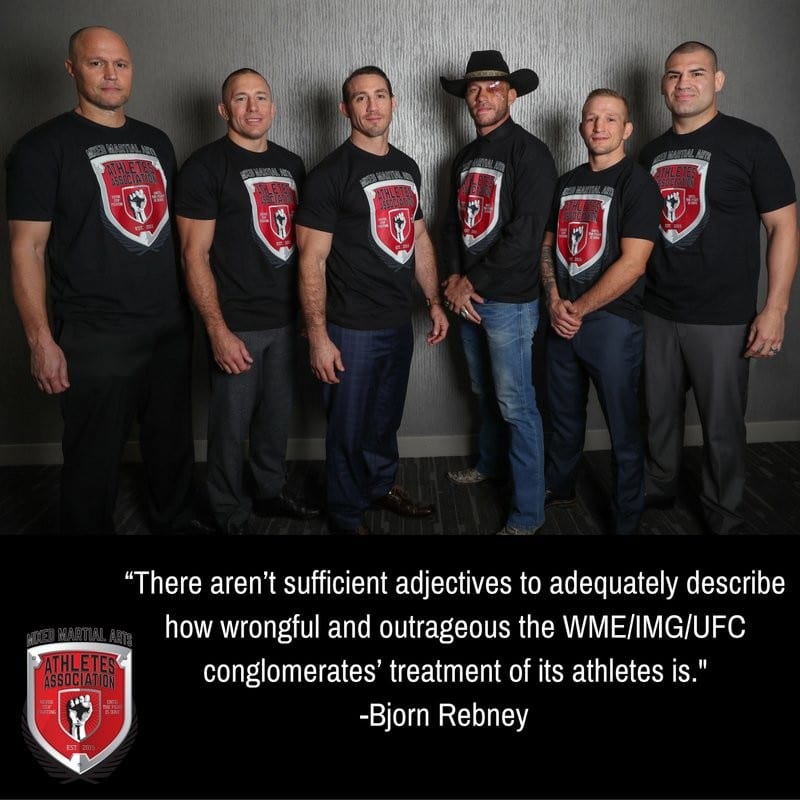 While much was speculated, the MMAAA is not a union. Instead, it is a “trade association” that will aim for fighters to become a collective, and will aim to equal what they deem to be the un-level playing field in the MMA between the athletes and the UFC (other promotions will not be involved).

The reason behind the distinction between unionization and trade association is that UFC fighters are independent contractors, and as such, union law isn’t as applicable as most would think. Instead, the MMAAA will aim to use the collective power of fighter involvement as a trade association to force the UFC’s hand in business. The term ‘labor strike’ was used.

Although the MMAAA appears has been formed by Rebney, who will no longer be involved in MMA promotion, the fighters will be running the association. The five names mentioned make up the MMAAA’s board, and Rebney will instead be an advisor on strategy.

The plan of the MMAAA was listed by Rebney as a three step program, in which they will aim for:

He revealed that they now intend to travel and meet with every fighter they can. They do not intend to reach out to the UFC. St-Pierre made several references to the fact that the UFC may put pressure on fighters and fighter agents to halt any progress on the MMAAA’s growth. He emphasized that it was time for fighters to stand together.

Rebney made a point to say that there is “law after law” that legally prevents the UFC retaliating.

Another interesting aspect to the entire process is that several of the fighters involved (St-Pierre, Velasquez, Dillashaw and Kennedy) are represented by CAA, a talent agency that is a direct rival to new UFC owners WME/IMG. While Rebney denied that CAA were not ‘backing’ the endeavor, they were ‘supporting’ it.

He also revealed that WME/IMG are paying themselves an annual $25 million management fee each year.

One part of confusion before the call was the busy world of MMA fighter collectives. In recent months, several organisations have been formed with the goal of forming fighter unions. While the fighters on the call did give credit to some of those other organisations, they mentioned that they felt this was the best project to move forward with. Rebney stated there was no intention to reach out to the other groups.

While the MMAAA’s success essentially depends on how many other fighters get on board  the high-profile nature of the announcement means that it’s likely the biggest step towards a fighter collective in the history of the sport.

Where we go from here, however, is as of yet unknown.