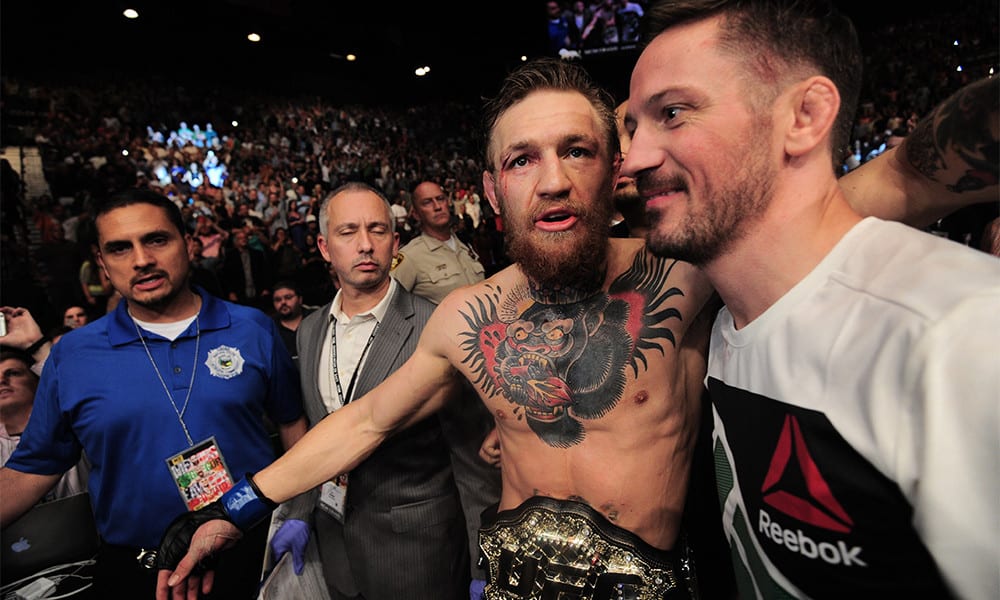 In the wake of the epic event that was UFC 205, we’re left with a phenomenal performance by UFC featherweight (and now) lightweight champion Conor McGregor.

One thing that struck many observers was the Irishman’s incredibly calm and relaxed demeanour — a stark contrast to the increasingly jittery Alvarez. A big part of that serene attitude can be attributed to McGregor’s training. With John Kavanagh, Owen Roddy and Dillon Danis in his corner on Saturday, fans were treated to some world class coaching.

You can find below corner advice for McGregor transcribed below.

[Alvarez attempts a takedown, they clinch]

Roddy: Left to the body. There you go. Beautiful!

Kavanagh: Watch that left leg, Conor. He’s coming up on a single leg, be ready to sprawl…Use your hips, Conor.

Roddy: Left straight is there.

Kavanagh: Here you go. Bring the beats down. Ice please. Nice deep breath. How do you feel?

Kavanagh: Great shots. Keep the left hand on the counter. Don’t lean in with the left hand – he’s looking to counter with the big right hand, yeah? So pop that jab. The teeps to the body are great. You’re cutting him off. If you feel he’s circling into the left high kick, that’s there too. Okay? So let’s keep that left hand for the counter. Very nice. Nice deep breaths. That’s a warm-up round.

Danis: He’s biting on the feints. You’ve felt his shots already. They’re nothing!

[McGregor connects with a big left]

Roddy: Jab is there.

Roddy: Jab is there as well.

Danis: He’s doing the same shot over and over.