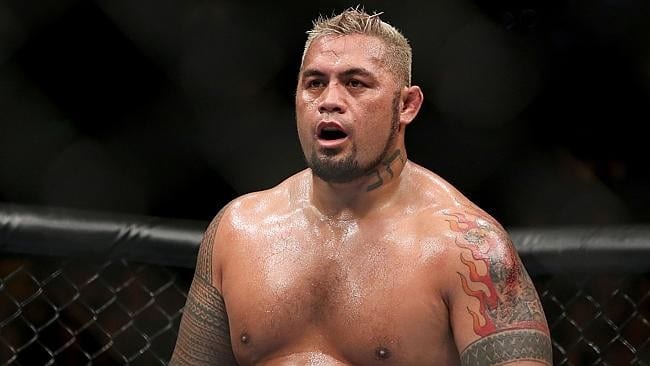 Nearly four months after his last fight, and Mark Hunt still isn’t happy with the UFC.

At UFC 200, Hunt faced and lost to the returning Brock Lesnar, only to find out days after the fact that Lesnar had failed a banned substance test. A test that was taken two weeks before the two stepped into the cage on fight night.

Following that, the New Zealander made it well known how disgusted he was at having to face someone he felt was cheating — especially when Lesnar was given an exemption from a mandatory 4 month testing period by USADA.

Combine that with the that other opponents Frank Mir and Antonio ‘Bigfoot’ Silva both failed for various banned substances following bouts with Hunt, and it’s some what understandable as to why he’s got a bitter taste in his mouth.

“It’s the third time I’ve had to fight a steroid user,” Hunt said, speaking to MMAmania.com. “I don’t think the penalties are harsh enough. I don’t think it is a fair environment. I’ve probably fought more juicers than anybody. The difference is now is that I realised I can actually lose an eye or something and not be able to compete again. I know fighting is kind of hard and all, but when these losers are taking steroids it makes it even worse.

“I think [punishments] should be strict on all of them[…]Any other sport is pretty harsh on steroids, but the difference in those sports is they aren’t trying to hurt someone like you are in mixed martial arts. They are affecting time or other people, but with MMA you are hurting others.”

Now, in light of the Lesnar bout, a fight particularly stinging when considering Lesnar’s considerable pay ($2.5 million), Hunt is taking a stand. The 42 year old wants some provisions added to his UFC contract, and has hired the legal services of Christina Denning from law firm Higgs, Fletcher and Mack to ensure they get implemented.

Before Hunt’s team can make their next step, there are still things yet to play out — namely Lesnar’s arbitration process with USADA to challenge the results of his failed test. The professional wrestler was given a continuance on his case while gathering evidence, pushing his hearing back until November 10. According to Denning, Lesnar’s legal team have requested further continuance, something both she and Hunt don’t want.

Hunt made headlines following the UFC 200 bout for demanding a cut of — and then eventually the entirety — of Lesnar’s fight purse. That is something still very much on his mind.

“[The UFC have] the ability to take away Lesnar’s purse, and it’s broad enough to include any money that he makes from the result of these fights,” Denning said. “So, theoretically, the UFC upon the finding of a violation could take all of the money back from Brock. Not only the 2.5 million dollar purse, but anything he earned from pay-per-view, if he had a win bonus, all of that, and then put it into it’s anti-doping program.

“Or better yet, and what we’d like to see happen, is the person that had to get in the ring with him gets allocated that money.”

As for Lesnar himself, Hunt feels as you’d as expect.

“He’s probably sitting there laughing about all the money he’s making,” Hunt said, “He’s still a fake, a fraud and a cheat. That’s all he will be known for. The problem is he ruins history. He ruins history for all the people’s history, for mine and everyone out there that competes clean. They need to have some penalties to take away their financial gain. That will stop them for sure.”

As for the potential lawsuit itself, Denning and Hunt feel they have several grounds to take the UFC to task for — particularly the USADA exemption Lesnar received upon his return. At the moment, a retired fighter who wishes to return to the sport is expected to undergo a 4 month anytime/anyplace drug testing regime before they’re able to fight, (recent examples include Chael Sonnen and Georges St-Pierre).

USADA (and the UFC) waived this 4 month period for Lesnar, due to nature of his sudden signing with the UFC and the short proximity to the event. Something that doesn’t wash with Hunt.

“You can say the UFC is trying to do everything they can to try and catch drug users, but then why would they give him a four-month exemption?” said Hunt. “I think they actually knew. They actually knew the pro wrestler was on the juice. All those losers are juicing. It’s all fake. It’s not a natural competition. They can do whatever they want to look good for the audience because it’s all scripted. How do I know this? I did pro wrestling in Japan myself.

“I’ve taken a lot of fights on short notice, but this one they gave him a four-month exemption. They had the sale [to WME/IMG] on. I’ve had enough of it and I shouldn’t have to suffer, neither should my family, because these guys are taking the juice, and lose out on money that I should be making because this dickhead is coming around here with his steroids. And why is it that they are not making penalties even more harsher for these guys? Because it’s a violent sport about hurting people.”

Denning confirmed that she’d be looking into the possibility that the UFC and Lesnar knew his return was coming long before it was announced, thus contradicting the logic behind his 4 month testing period exemption.

“I’ve had enough,” Hunt said. “It’s time to make things even. I’m not salty because I lost the fight [to Lesnar]. I’m never salty about a loss, but when someone is cheating, that’s where I get a bit upset. I’d like to see things change. I’d like for them to put rules in so if you are caught cheating all your money goes to the other guy. There shouldn’t be any sort of leniency for these drug cheats because they knowingly take these steroids to hurt people.

For now, it’s a waiting period until Lesnar’s case is done with. Once that result is confirmed, you can expect Hunt’s team to move forward with legal proceedings. As for Hunt’s career, it could be a while before he’s seen strapping on the gloves again.

“To be honest, [the UFC] are taking away my love for fighting. What I love to do is fighting. They are taking it away by giving me all these freaking cheaters. It’s not their fault, but it might’ve been their fault because they might’ve known. I want my release from my contract if things don’t change. I don’t even want to fight anymore. These cheaters have ruined everything.”