Fabricio Werdum speaks out against Reebok deal; calls fellow fighters to do the same
Press enter to begin your search
MMASports

Fabricio Werdum speaks out against Reebok deal; calls fellow fighters to do the same

When Fabricio Werdum posted a picture to Instagram branding himself a Nike fan, Tuesday, eyebrows were… 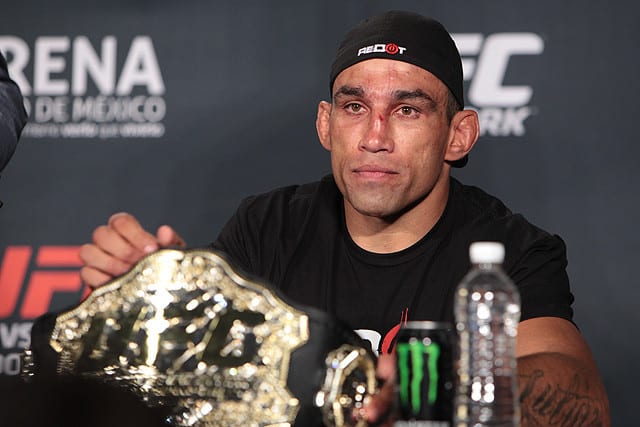 When Fabricio Werdum posted a picture to Instagram branding himself a Nike fan, Tuesday, eyebrows were raised. Those eyebrows probably were raised even more so by the caption accompanied.

Today, the former heavyweight champion took to his Facebook and clarified his comments — and displeasure — with the exclusive apparel deal the UFC fighters are expected to adhere to.

“I was protesting. Actually I’m not forced to use Reebok, I don’t have a contract with them,” Werdum said (translated via Reddit user ‘trulyskeptical’). “For people that don’t know Reebok sponsors, well, “sponsors” only during the fight. In the fight week you have to wear it, it’s in the contract, but in reality I don’t have a deal with them to post outside the UFC. I can post whatever I want, if I want to post Kings (MMA) I’ll post, if I want to post Nike or any other company or the sponsors I have. Anything, so I’m not obligated.

“For people saying I’d get in trouble, there will be no trouble” he continued. “It was just a protest, something that before we could show any sponsor we wanted, we used to get real good money, it was a lot different from Reebok. Today with Reebok there is a pay scale, if you have a certain number of fights you get $5.000, $8.000, of course it is good money, but nothing like it was before, so of course it was a protest.”

Echoing the thoughts of Donald Cerrone, Werdum called on fellow fighters to start making noise, instead of just accepting whatever terms the UFC put on the table.

“I think fighters need to start speaking, because no one is happy, it’s something that is in our contract, we have to sign it and end of story,” Werdum said. “We don’t have options. It was nice because it was featured even in Globo.com, people talking ‘Werdum signed with Nike’, no, but if Nike is interested, hit me up.

“So just to clarify, the people thinking I will get in trouble, nothing will happen. I even tell the fighters, if some company won’t sponsor you, you gotta cover up their names, gloves, shin guards. Don’t [give] free promotion. That’s our job, our image, our fights. Just because someone sends you some gloves you don’t need to keep making several posts with them. That’s not how it works, you gotta value your image.”