One of the greatest rivalries in MMA history isn’t going anywhere. At his… 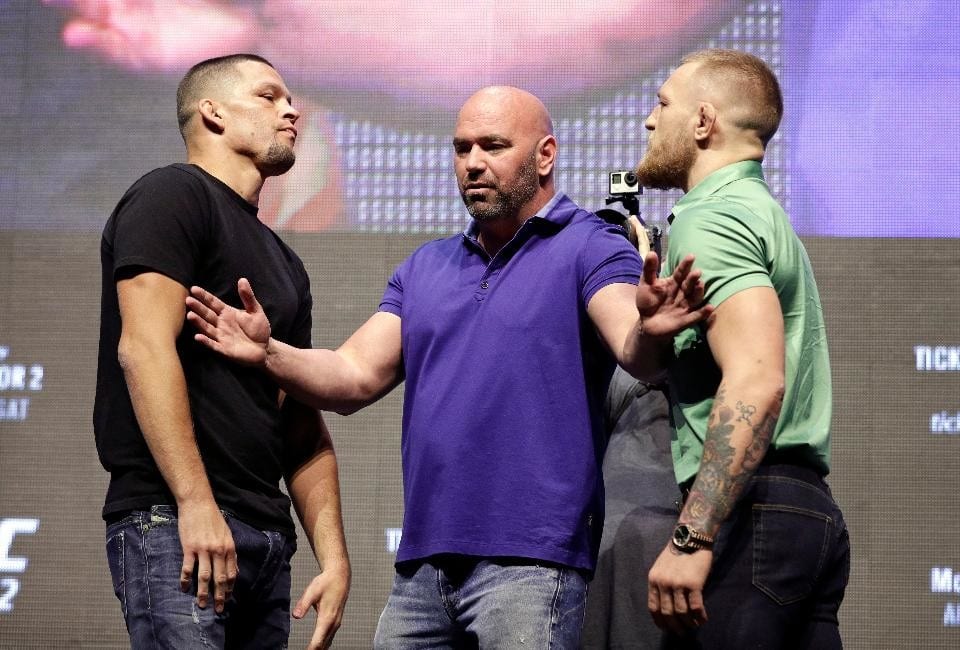 One of the greatest rivalries in MMA history isn’t going anywhere.

At his hour long “an event with” session yesterday, Conor McGregor was asked about his old two-time foe Nate Diaz, and how he felt about what many consider to be his greatest opponent.

The answer was emphatic. While McGregor still views and respects Diaz as a game opponent, he’s less than impressed with the way the Stockton native has been handling himself as of late.

“Nate’s a bitch. Nate’s a fucking bitch, and let me tell you why,” McGregor said. “I had the biggest respect for Nate – and I still have big respect for Nick, he’s out doing his thing – but when he took that phone call or that video call from Floyd Mayweather, and was like, ‘hello Floyd’s fans,’ — he was Floyd’s bitch that night. I was like, you fucking pussy. You absolute pussy.

“When he had that video call, he should’ve been on the other end of that line, and when Floyd was saying ‘you made McGregor tapout,’ he’s like, ‘yeah I did,’ and Floyd is saying, ‘I’m going to finish the job’, he should’ve said: ‘shut your ficking mouth or I’ll strangle you too,’ and then post that everywhere. And then all of a sudden, it would’ve been like, fuck Floyd. It would’ve be me and Nate again.

The duo’s story will long be considered one of the most captivating in UFC history. Their first encounter was one of the more shocking moments in UFC history, with Diaz stepping in just two weeks before and defeating McGregor in the second round — a testament to the unpredictable nature of the sport. Their second fight was equally as fascinating, with McGregor devoting himself to revenge more than ever before, and doing so after 25 minutes of hell.

Because of the epic battles, and the success the events generated, many want to see the rubber match.

“I was expecting a different situation, but I couldn’t believe it when I watched it. I watched like 10 minutes of it, and Floyd’s like, ‘hey Nate, say hello to my fans.’ You fucking bitch. It’s the biggest bitch move I’ve ever seen. So whatever, it is what it is. Now you’re back in the queue. Now you’re at the back of the queue.”

“Don’t get me wrong, me and Nate will throw down again, 100 percent,” McGregor said. “It’s one apiece. We’ll finish it off. I’d imagine it will be for the lightweight world title, 155. It could be like a skeleton wrapped in cling film. If his team is wise, they’ll talk him out of it. They’ll say, ‘you’ve made some money, your face is drooping to the left, your speech is slurred. Chill now. Enjoy the money.’ But they’re not the most intelligent people, so I’m sure me and Nate will go again.”