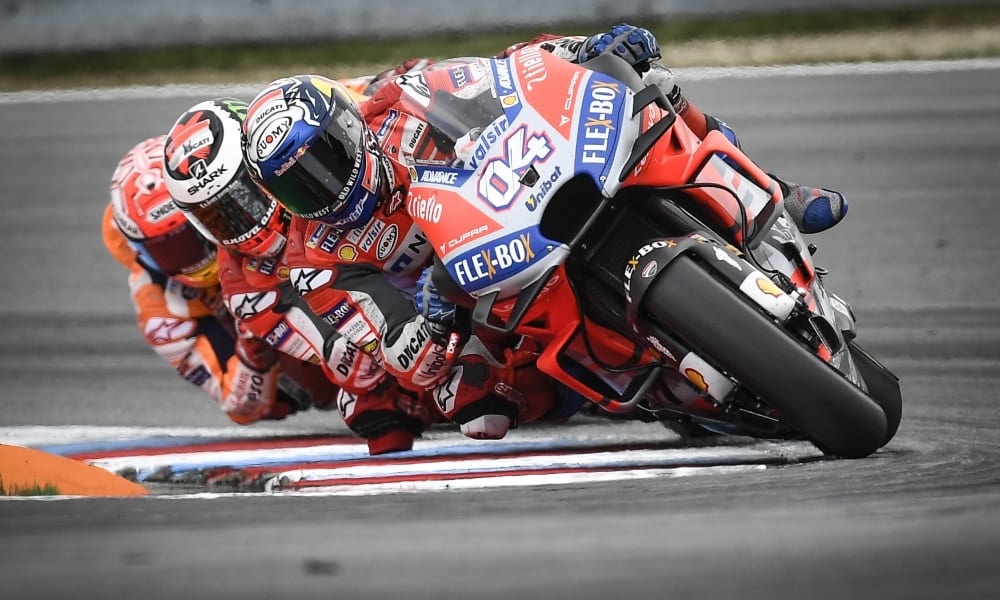 If you’re looking for the most exciting motor racing series in the world, look no further than the elbow to elbow action of MotoGP, where the fastest motorcycle racers on the planet do battle around the best circuits in the world at speeds approaching 220 miles per hour.

And now, 10 rounds into the 19-round 2018 season, the stars of MotoGP are all chasing one man, defending world champion Marc Marquez. The ridiculously talented Spanish star won his fourth MotoGP world title last season, and he’s still just 25 years of age.

He’s leading the series again this season and extended his championship lead at the weekend, though he had to be content with a third-place finish in the Czech Republic after a thrilling race at the Brno circuit. 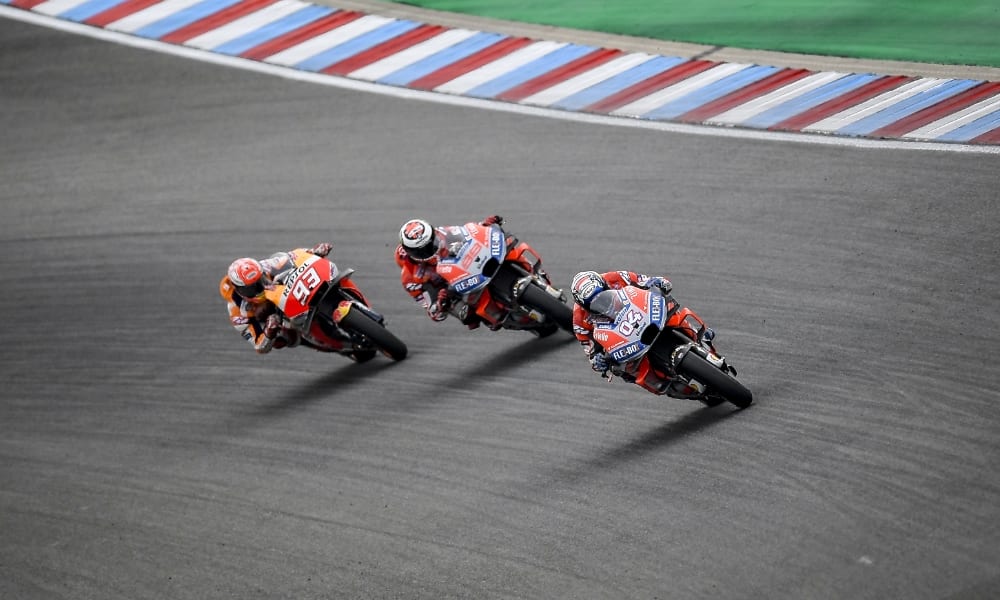 The race was won by Ducati’s Italian star Andrea Dovizioso, who held off teammate Jorge Lorenzo and world champion Marquez in a gripping three-way fight to the flag that delivered yet another breathless finish on a spectacular day of racing.

In case you missed it…

“It was an incredible win!” said an elated ‘Dovi’ after the race.

“Before this weekend I was excited because I felt that we could do well, but I never expected such a spectacular victory. I was very quick right from the first session on Friday, yesterday I did an awesome qualifying, today in the race I had a perfect strategy, and so I’m very pleased with everything. 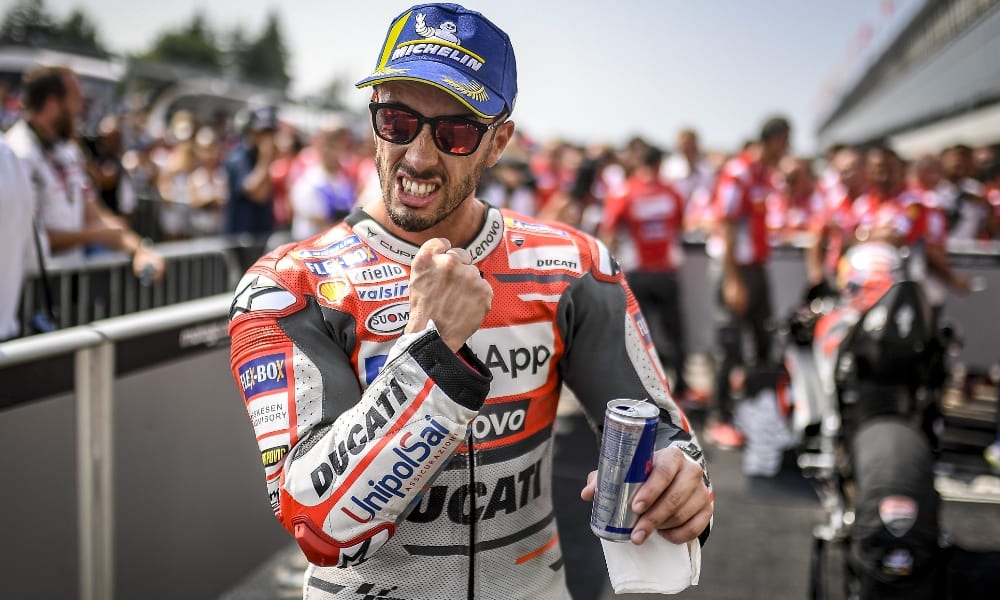 “I managed the race lap by lap, trying to interpret what was happening around me and see how the other guys were riding: I raced well without ever misusing the rear tyre and, even though I was having a bit of difficulty in the final stages, in any case I was able to fight off Jorge and Marc, who today were both really on top form.”

Dovizioso’s teammate, former world champion Lorenzo, was content enough with his performance, saying: “I’m very happy about my second place but also for the team’s 1-2 result and I’m very proud about the way we were able to overturn the situation from Friday, when we were in a bit of difficulty.

“Bit by bit we improved the bike to make it very competitive and we found a setting and a strategy for the race that worked well. Today I managed the situation calmly, because it was vital to look after the tyres and get to the end of the race in the best possible condition in order to try and attack and play my cards. 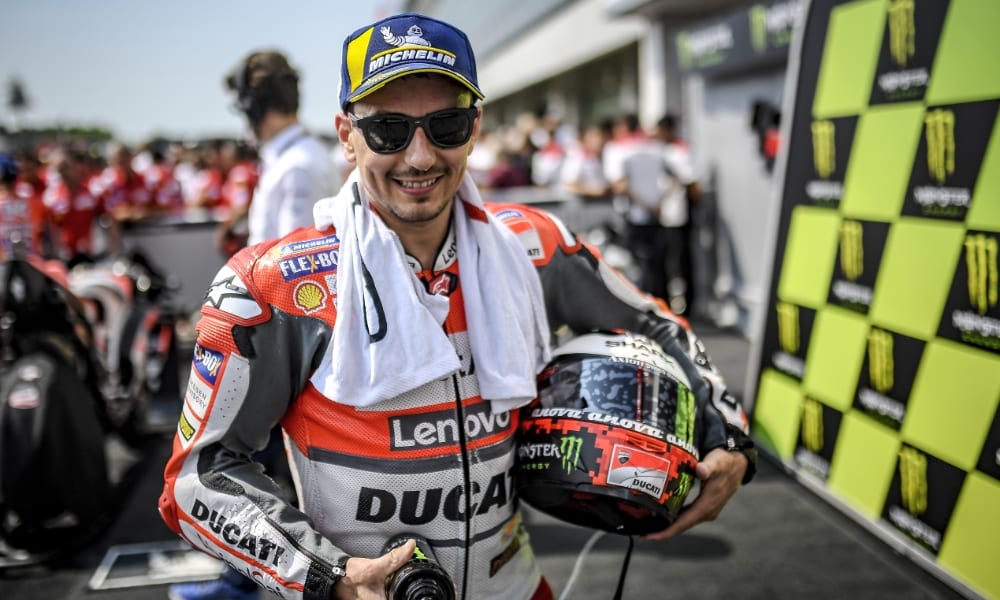 “I was feeling good and the bike was very stable, but I was struggling a bit in acceleration and it was a pity because I could have fought for the win, but my pass on Marquez two laps from the end allowed Dovizioso to gain a small advantage and it wasn’t possible to pass Andrea, who did a really great race.”

Marquez still holds the advantage in the title race, but with the Ducatis pair of Dovizioso and Lorenzo looking strong at every circuit, expect the title fight to go all the way to the final round once again. 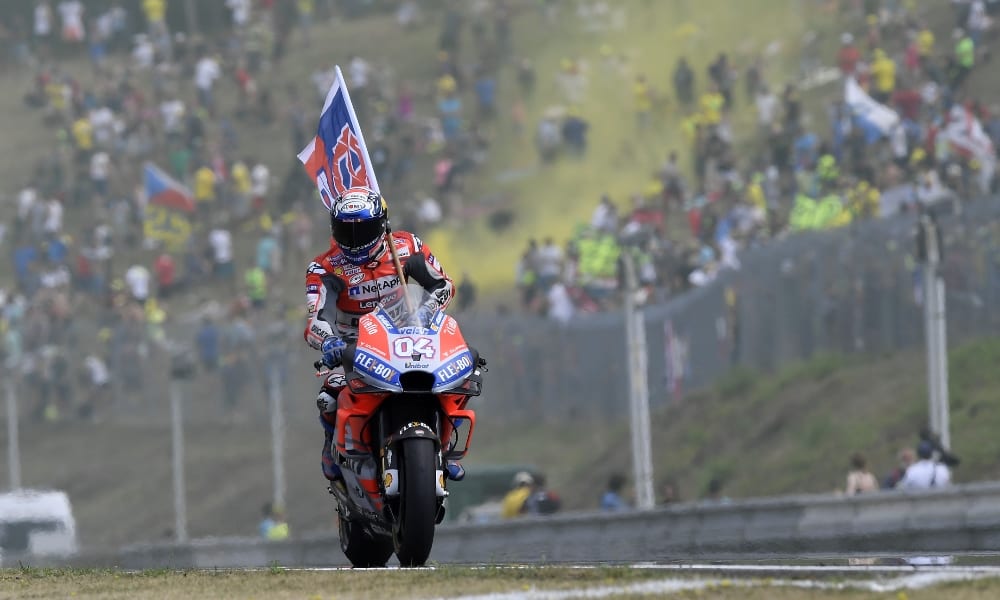 Check out the best shots from the Czech Grand Prix at Brno, courtesy of MotoGP and the official Ducati team. 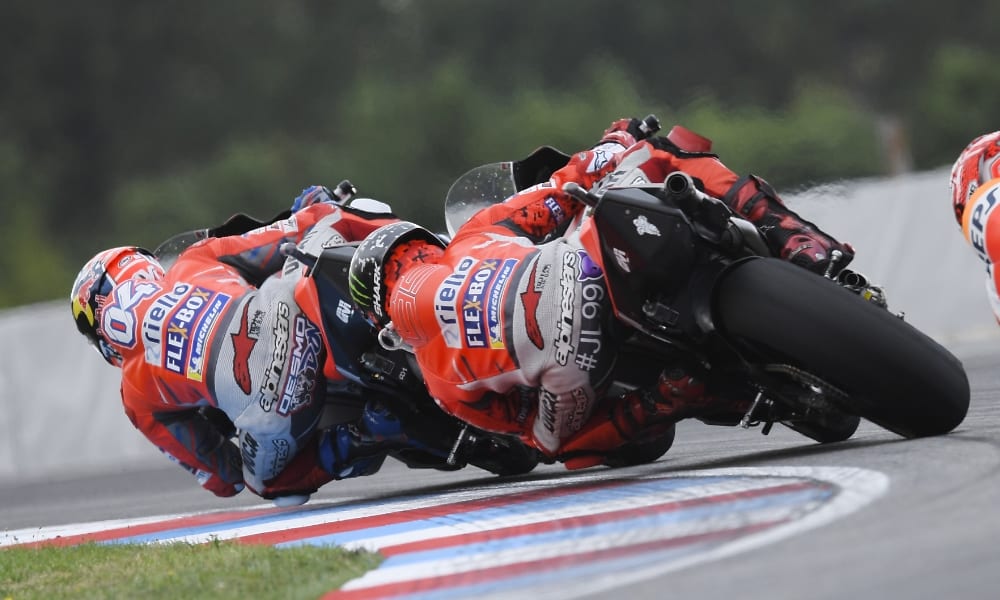 Knees and elbows down: Dovizioso and Lorenzo riding on the limit at Brno (Pic: Ducati) 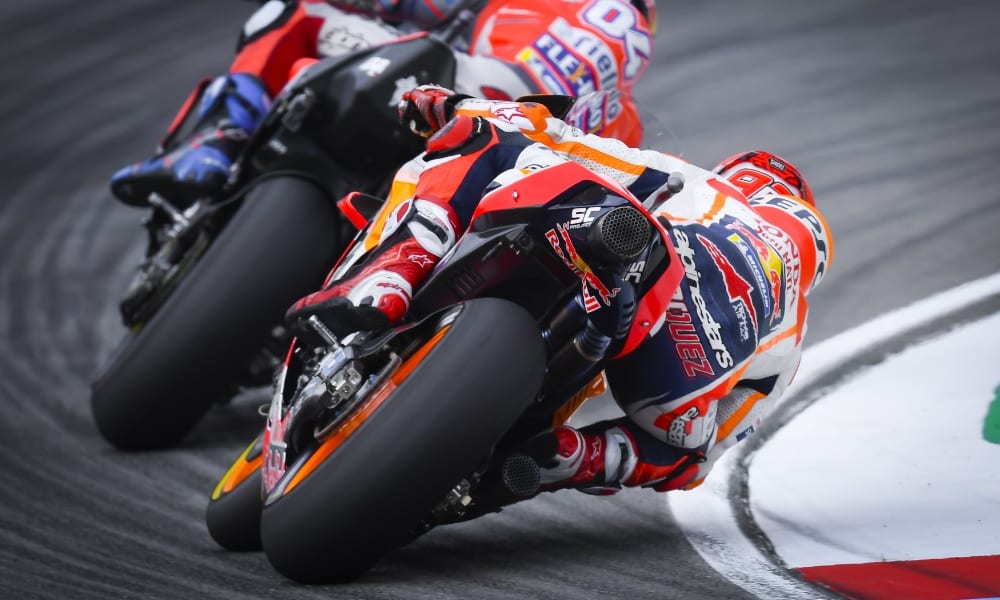 Marc Marquez hoped to nick the win late on, but had to be content with third place (Pic: MotoGP) 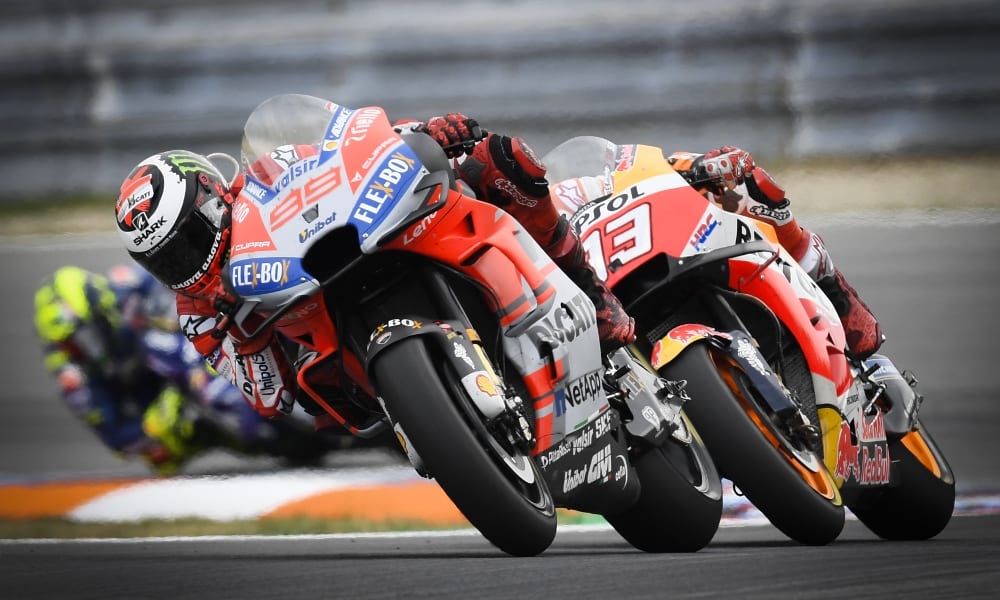 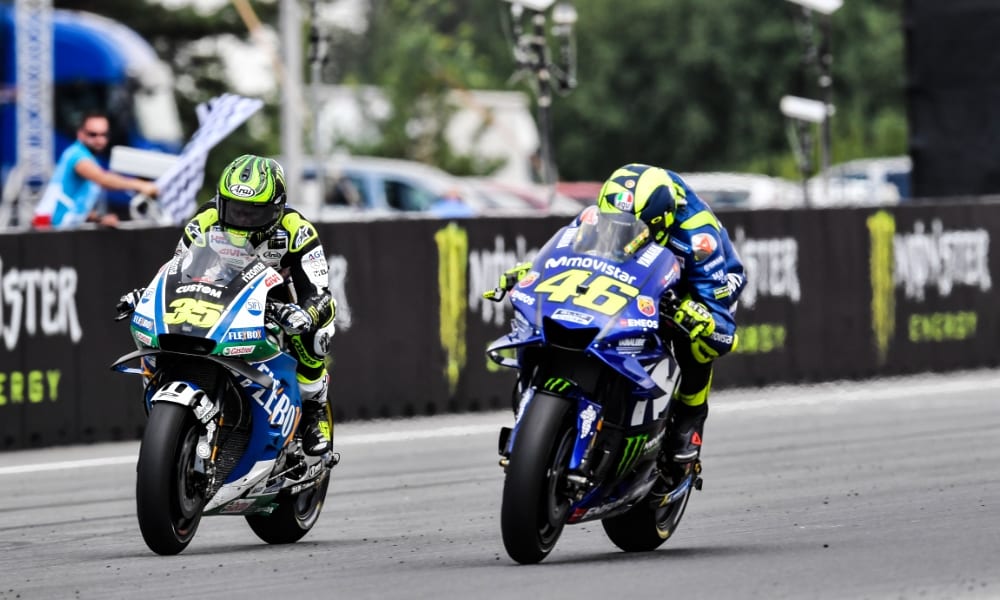 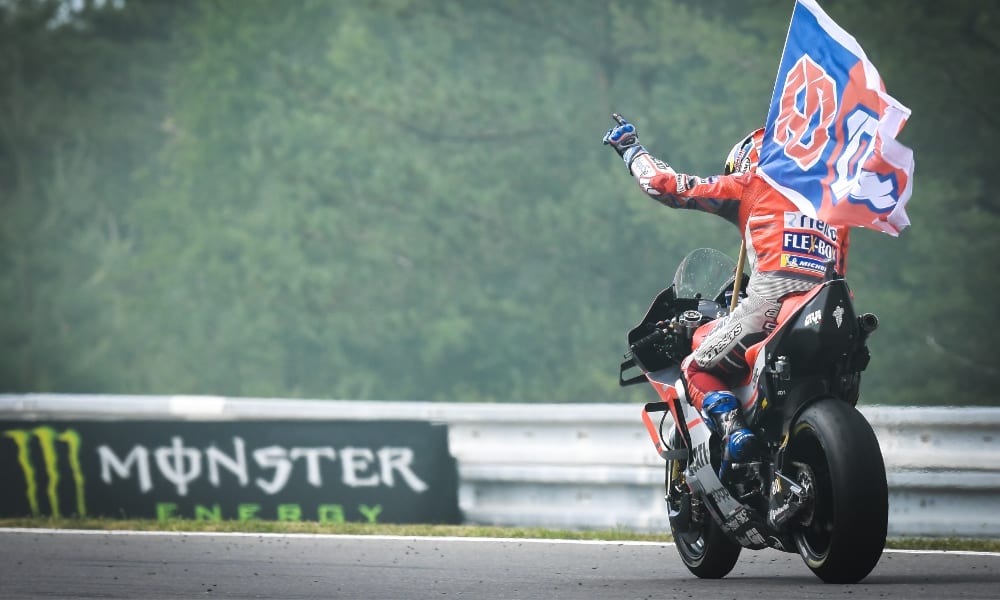 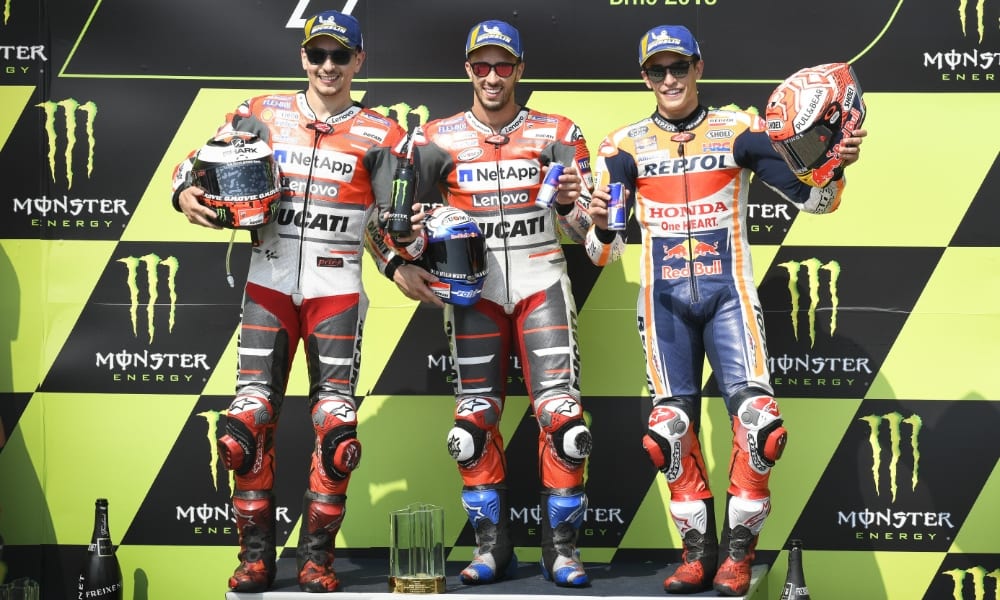