Here is all you need to know about this weekend’s UFC 216 card in Las Vegas. 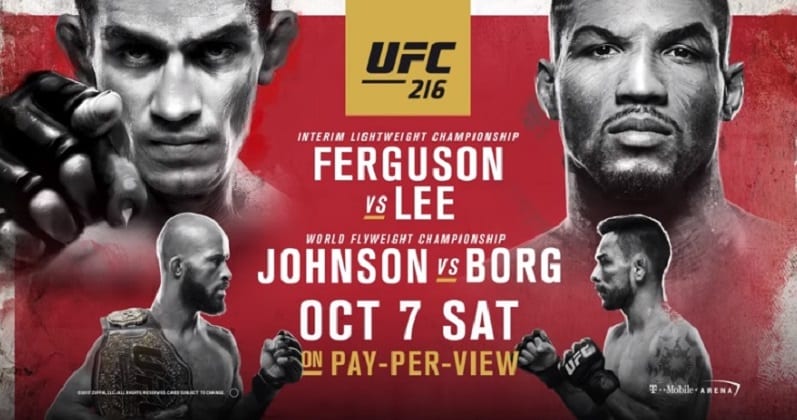 The future of the UFC’s lightweight division will become that little bit clearer this weekend.

With Conor McGregor, the undisputed champion at 155-pounds, awaiting a fight announcement of his own, top contenders Tony Ferguson and Kevin Lee will do battle for the division’s interim title and, in all likelihood, the opportunity to potentially step into the Octagon with McGregor in the future.

Ferguson, who has been vocal about his desire for a title shot, will come into Saturday’s bout on the back of a 9-fight win streak which has taken him from winning the 13th season of The Ultimate Fighter to becoming one of the division’s most dangerous fighters.

Kevin Lee, meanwhile, brings a five-fight sequence of wins into UFC 216 in his quest to become the interim champion at 155-pounds.

Elsewhere on the card, Demetrious Johnson, one of the sport’s pound for pound greats, will look to (finally) beat Anderson Silva’s UFC record for consecutive title defences. Opposite him, Ray Borg will provide the underdog opposition.

Rounding off the main card, Fabricio Werdum will take on Derrick Lewis while Beneil Dariush takes on Evan Dunham in another interesting clash at lightweight.

Watch the full UFC 216 countdown below: