Video :: Referee forced to save fighter from vicious post-fight assault

The quick thinking of the referee saved the defeated fighter from receiving more damage. 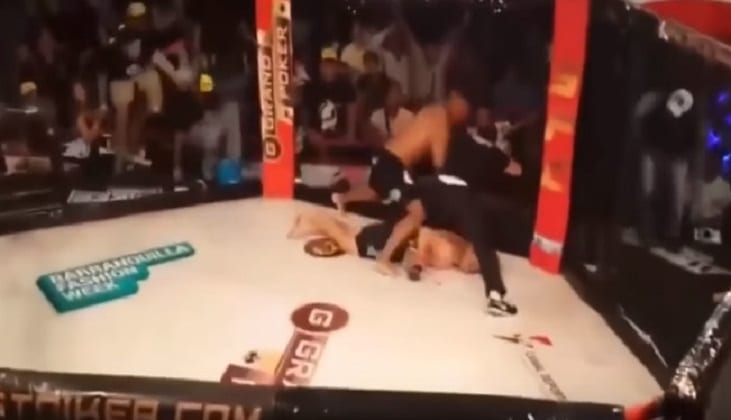 Referees sometimes get a bad rap in mixed martial arts. Fans complain of early (or late) stoppages, or lament referees failing to take effective action against eye-pokes, inadvertent or not.

The vast majority of them, though, do their best to offer as level a playing field as possible for the two athletes sharing the cage with them and are sometimes forced into very unusual situations as a part of their profession. This is exactly what happened at a regional MMA event in Brazil recently.

After a fairly standard looking stoppage, the winning fighter appeared to want to continue an assault on his defeated opponent long after the bout had been declared over and it was only the quick thinking of the referee, along with a host of cornermen who stormed the cage moments later, which saved the defeated fighter from taking any further needless damage.

Details as to the identities of the fighters and the referee in the below clip are still to filter out but extreme kudos must go to the referee who moved to immediately quell the situation. It even appears that he takes the offending fighter’s back in the melee.