Greg Hardy gave it a go, but in the end the win over a top ten heavyweight eluded him in Russia. 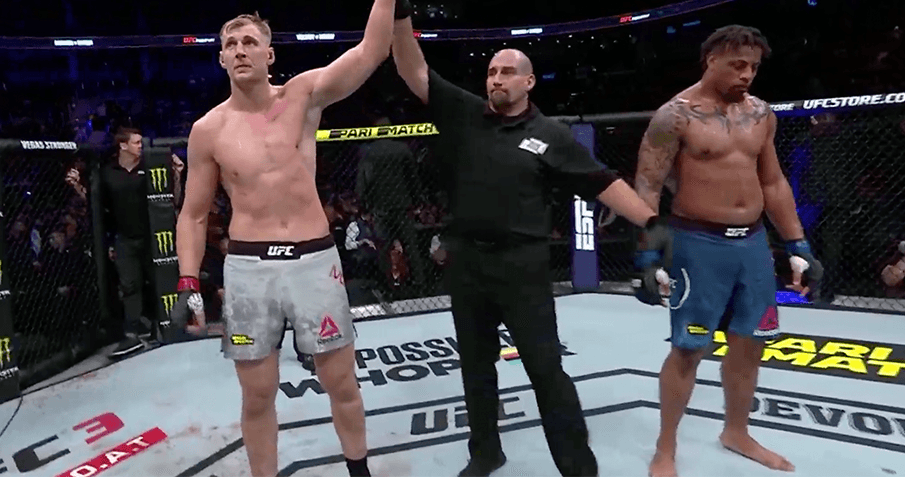 The controversial heavyweight stepped up on short notice to meet the hometown hero Alexander Volkov in Moscow, Russia, tonight in the co-main event of UFC Fight Night 163.

While the UFC will no doubt appreciate his gameness, the gamble didn’t pay off for Hardy, as he was defeated by unanimous decision, with all 3 judges scoring it 30 x 27 to Volkov.

In the first round, Hardy wasn’t without success, having landed a few nice jabs and hooks, but by the end of the stanza, Volkov’s experience shone through, as the Russian found his control with the distance and pace.

While in between the first and second rounds, Hardy informed his corner he’d suffered an injury to his right hand, in truth that rarely affected round two, which saw Volkov increasingly go to the body with kicks that, by the bell, saw Hardy bending over at the waist to try and avoid their stinging power.

The third saw much of the same, with Hardy’s pace starting to flag, while Volkov’s more relaxed and precise output leaving him fresh throughout round 3. That being said, in the end, Hardy’s first attempt at a top ten heavyweight will likely serve as a learning experience for him to study and move forward. For a man who’s first professional fight was just a year and a half ago, to go fifteen minutes with a known heavyweight is no mean feat.