Tempers were very much frayed at today’s Bellator weigh-ins in London. 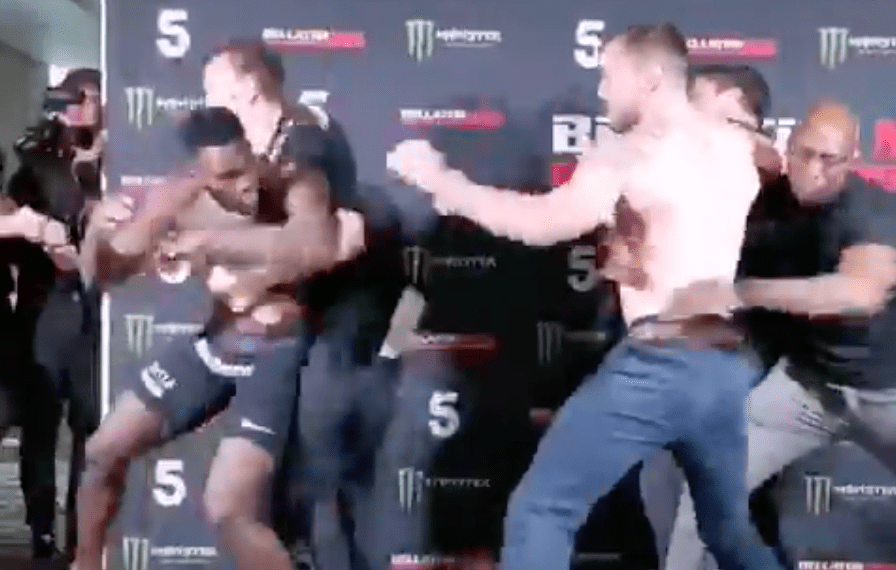 There must be something in the air in London this week.

Just 24 hours after James Gallagher and Mike Kimbel were embroiled in a confrontation at yesterday’s media day in the English capital, the two men involved in the co-main event got an early start to their much-anticipated clash when Fabian Edwards and Mike Shipman became involved in a heated scuffle moments after stepping on the scale at Friday’s weigh-ins.

Edwards, brother of UFC welterweight contender Leon, is a perfect 8-0 in his professional career thus far and has been signposted by many as among the finest prospects currently fighting on the European scene. Shipman, meanwhile, is another of Europe’s top middleweights despite suffering defeat in his last bout to Costello van Steenis in June.

Check out the video of their melee below.

They officially come to blows live on @channel5_tv, Saturday at 10 p.m. GMT. pic.twitter.com/VppRHsjfiv

The Bellator London card will be headlined by Michael ‘Venom’ Page’s clash with short-notice replacement Giovanni Mellilo while top prospect Sorek Bak makes his debut for the organisation opposite Terry Brazier. SBG Ireland’s Charlie Ward will also be in action against Pietro Penini and former UFC fighters Robert Whiteford and Sam Sicilia also face each other.