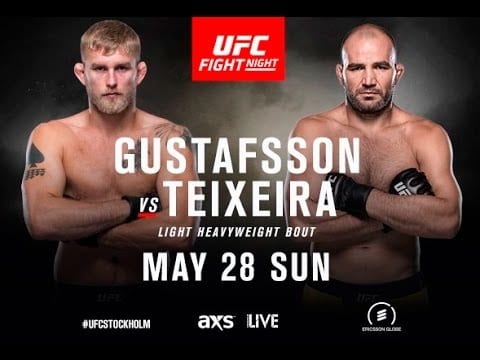 In the main event of UFC Stockholm, Alexander Gustafsson exorcised the demons of his last fight in front of a hometown crowd with an emphatic win over Glover Teixeira, defeating the Brazilian in the fifth and final round via knockout.

Repeatedly hitting Teixeira over and over with the right uppercut, Gustafsson’s speed and combinations made him look as good as ever. And, while this was Gustafsson’s fight, Teixeira’s toughness earned him plenty of plaudits, rising to his feet after being dropped multiple times.

In the end, it was the uppercut that put an end to it, with Gustafsson landing several in a row, dropping Teixeira to the floor before walking away in a victory.

And, if all that wasn’t enough, the Swede sealed the deal one of the best nights of his life by proposing to his girlfriend in the centre of the cage to a chorus of cheers.