A look ahead to Saturday’s UFC event in Gdansk, Poland.

The UFC’s second trip to Poland brings with it a mix of fighters on the rise and other looking for redemption, as well as a host of native fighters hoping to capture the imagination of what will be an electric crowd inside the Ergo Arena in Gdansk on Saturday night.

The main event features one of the sport’s true veterans squaring off with one of the welterweight division’s most highly touted prospects. Donald Cerrone will tie Michael Bisping’s record of 20 wins inside the Octagon if he bests Darren Till on Saturday night but in the undefeated Liverpudlian, he faces a fighter on the verge of a breakthrough in the UFC’s 170-pound fold.

Cerrone, the betting favourite coming into the bout, has lost his previous two UFC assignments (Robbie Lawler, Jorge Masvidal) and in Till he faces an extremely dangerous yet largely unknown quantity. Cerrone’s skillset has been on display throughout his 35 UFC & WEC bouts and has remained relatively constant throughout — a rangy thai boxer and couples that with an effective ground game.

In Till, however, he will face a longer, taller and stronger fighter. The 24-year-old has never tasted defeat in his professional career, amassing a record of 15 wins and a single draw and most of those wins have by way of his viciously effective striking game which mixes in potent kicks, elbows and a wonderfully disguised straight left.

The Pick: Look for Till to land a big body kick in the first half of the fight which will have Cerrone reeling, after which Till will up the aggression and finish via TKO on the ground. 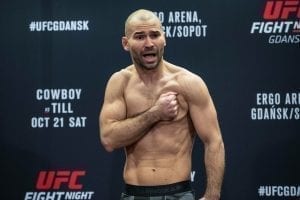 Elsewhere, and somewhat bizarrely placed in the middle of the undercard, Artem Lobov takes on Team Alpha Male’s Andre ‘Touchy’ Fili in a bout more than two and a half years in the making after first inquiring about him on the set of The Ultimate Fighter in 2015. ‘The Russian Hammer’ came into his training camp for this bout having spent the summer months working on his own stand-up game as part of the McGregor-Mayweather camp which, as he told TheMacLife.com, has led to an evolution of his arsenal.

Lobov doesn’t make any bones of his strategy: he is going to wait for the opening bell, walk forward and instigate exchanges on the feet and look to land on his opponent’s chin. In Fili, he will face someone who is willing to meet him in the middle. Fili has an almost unprecedented reach for the featherweight division — 74 inches — and will look to keep Lobov behind his jab and push him against the cage.

Luckily for him, Lobov is adept at closing the distance owing to a lifetime of sparring with Conor McGregor and won’t be overawed by his opponent’s reach advantage.

The Pick: After a wild first round in which both fighters land on each other, Lobov will start to impose himself in the second leading to a stoppage in the third.

The rest of the card:

Women’s Strawweight: Karolina Kowalkiewicz vs. Jodie Esquibel — Kowalkiewicz gets the decision victory in her native country.