The UFC described the incident as a violation of their outfitting policy. 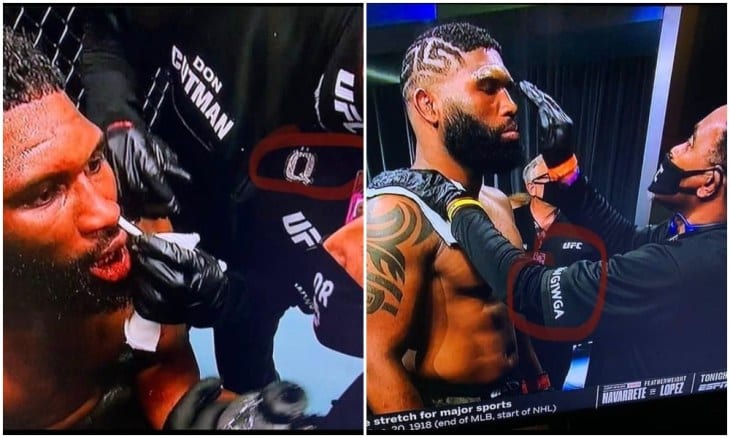 Don House, a longtime cutman with the Ultimate Fighting Championship, has apologised after being caught on last weekend’s UFC broadcast showcasing the logo of the baseless ‘QAnon’ conspiracy theory, which suggests that some of the world’s most high profile figures in media, politics and public life are involved in a web of child-trafficking.

House sported a patch on his arm showcasing the ‘WWG1WGA’ (‘where we go one, we go all’) catchphrase of the group which has been deemed a domestic terrorism threat in the United States following several incident in which its supporters placed themselves or others at risk due to misguided belief in the debunked conspiracy. It claims that a group of US military figures are working in tandem with Donald Trump to bring down a dangerous group of international child abusers (most or all of whom are conveniently political rivals of Trump).

The UFC were not happy with the use of the logo, later saying in a statement that it was “a violation of our staff event outfitting policy.” The logo was seen during last weekend’s broadcast and House has since apologised for his actions, saying that he doesn’t follow the core beliefs of the group but that he supports their message of unity.

“I always read this stuff where they say this is a spiritual group,” House said. “Some say they’re a part of child trafficking. No. They’re the complete opposite of that. They’re trying to expose that.

“My message is simple. It’s not about I signed up for a club that wants to overthrow the government. I’m not a part of that nonsense. But I do like the message where it talks about everyone being as one in the United States, and the planet, for that matter. That’s my message.

“If I’d known I’d get this much flack, I would have never worn the thing, to be honest with you. People’s belief is their personal belief. That was mine. I was just showing that I really love the message, especially in this day and time with all the crap that’s going on. Did you see the NASCAR guy’s locker room? You notice how everybody got together for that one person? Everybody got together for him, and I thought, that’s what America needs. To me, that’s the message, ‘Where We Go One, We Go All’ is to me, where we all have to stand up for everybody. We’re Americans. This country is built for everybody.

“That’s the message that I’ll always live with, and I thought it would look great on my sleeve. I didn’t know it would cause this much controversy. Do I regret it? Yeah, I do, the embarrassment for the UFC and to Dana, because he is a friend of mine. But do I believe that we as Americans should be one? I will until the day I die.”