Chicagoans, get ready for a great night of action. 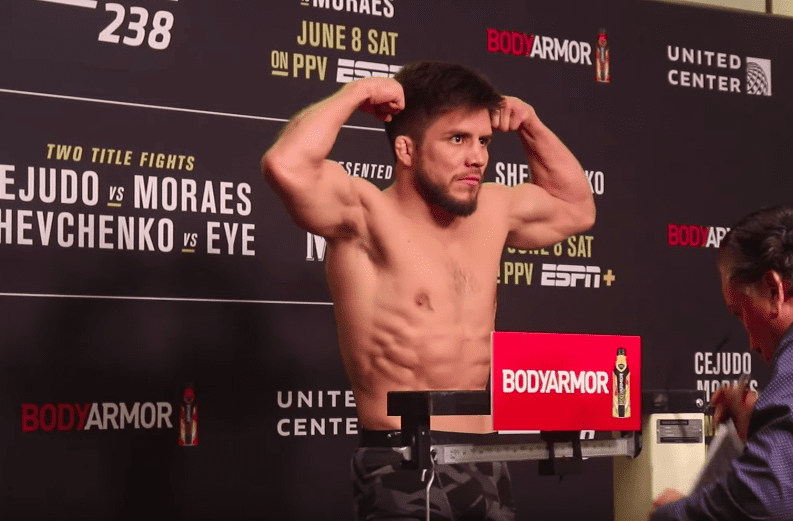 All 26 fighters scheduled to compete on Saturday night’s UFC 238 card in Chicago, Illinois have successfully made weight at Friday’s early weigh-ins in the UFC host hotel.

Two title fights will top the card with Marlon Moraes and flyweight champion Henry Cejudo tangling for the UFC’s 135-pound title belt after T.J. Dillashaw relinquished it earlier this year following a positive test for EPO. In Dillashaw’s stead we have a thoroughly fascinating between Brazil’s Moraes, who has been defeated just once since 2011, and 125-pound kingpin Henry Cejudo, whose recent public appearances suggest that he has taken to his role as champion with aplomb (and capes, magic hats and plastic snakes).

In the co-main, the women’s flyweight title is on the line when champion Valentina ‘Bullet’ Shevchenko faces down the challenge of Jessica Eye, who earned the shot with successive wins against Kalindra Faria, Jessica Rose-Clark and Katlyn Chookagain.

And, in perhaps the bout with the most eyes focused on it, Tony Ferguson will meet Donald ‘Cowboy’ Cerrone in a hotly anticipated lightweight fight.

Elsewhere on the card, the bantamweight division remains in focus as a top contender match-up between Aljamain Sterling and Pedro Munhoz should provide clarity in the title ladder at 135-pounds, as should the clash between Petr Yan and Jimmie Rivera.

Several other crucial clashes will also be featured inside the United Center. Karolina Kowalkiewicz vs. Alexa Grasso promises to be fireworks, as does the showdown between Tatiana Suarez and Nina Ansaroff.