Daniel Cormier left it late but every bout on Saturday’s UFC 220 card is official. 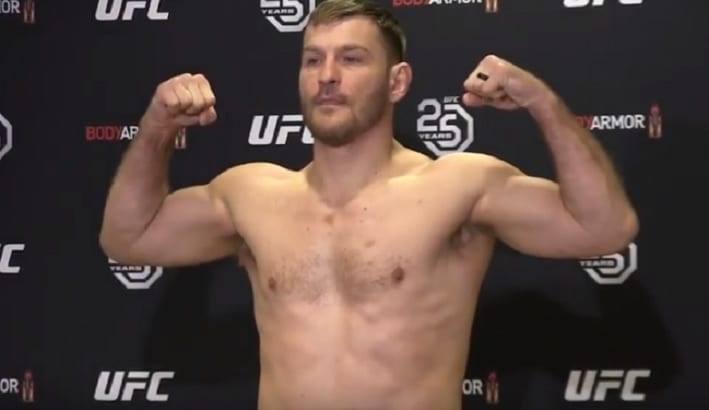 It wouldn’t be a UFC weigh in without a little drama and that’s exactly what we got this morning at the UFC 220 early weigh-ins ahead of tomorrow night’s event inside the TD Garden.

Daniel Cormier was the final fighter to the scales this morning, registering the championship weight of 205-pounds for his light heavyweight title defense against Volkan Oezdemir in tomorrow’s co-main event. Cormier, who makes no bones of the fact that the cut to 205 is a difficult one for him, had just over 20 minutes remaining to make weight — however rules in Massachusetts, fighters are afforded a one hour concession provided that they step on the scales initially within the two hour time allotment.

The much anticipated heavyweight main event between champion Stipe Miocic and ferocious challenger Francis Ngannou is also official. Ngannou will have a noticeable size advantage compared to the champ, after he tipped the scale at a mammoth 263-pounds. Miocic, meanwhile, weighed in at 246-pounds.

Elsewhere throughout the card, in something of a rarity no fighter missed weight in the 11 fight card.

The full weigh-in results are below: