Self-defense 101: How to defend yourself in a bathroom stall, starring Jason Knight
Press enter to begin your search
EntertainmentMMA

Self-defense 101: How to defend yourself in a bathroom stall, starring Jason Knight

What lessons can we learn from the Brawl In The Stall? Jason Knight explains all… 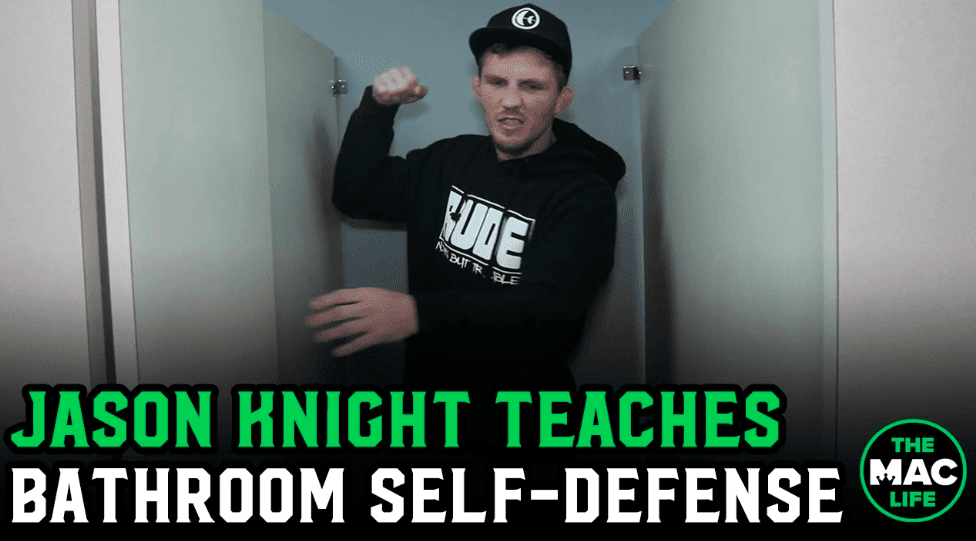 Life can present you with some interesting situations.

A year or so ago, UFC fighter-turned-bareknuckle-boxer Jason Knight found himself in an unusual predicament when, just after using the facilities at a club, two unruly and drunk men burst into his stall looking to cause some trouble. However, they most likely hadn’t counted on the fact the man who they cornered was a veteran of nearly 30 professional fights — as well as countless others which don’t appear in any combat sports ledger.

The brawl which ensued has gone viral in the past few days ahead of Knight’s rematch with Artem Lobov at BKFC 9 this weekend, so we thought it a good idea to bring him back to a scene similar to that of the initial incident, recount his strategy and ask him for any self-defense tips he may have learned from his experiences in what we hope becomes known as the ‘Hitter In The Shitter’.

“You got to make sure that if there’s two guys there, you definitely don’t want to hit the little guy first,” Knight told The Mac Life. “You want to knock the big guy out and then fight the little guy. That’s what I tried to do. I hit him with a good one.

“Whenever I hit him, essentially he was done. He didn’t want to fight no more. He put his head on my chest and rushed me back. I’m sitting on top of the toilet like this. I couldn’t quite get this right hand free at first so the little guy, he got a couple of good licks in. But once I got the right hand free I got the big guy — he’s got his head in my chest — I just start firing over the top, landing as many punches as I can on the little guy.

So, what are we to learn from this? If you find yourself in a close-combat situation with multiple assailants, such as in a bathroom stall, Jason Knight recommends: