Ireland has another mixed martial arts world champion after O’Driscoll stuns hometown crowd with a submission win in enemy territory. 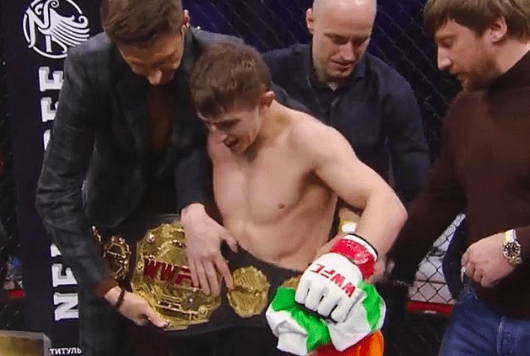 O’Driscoll had been in line to fight for the Cage Warriors flyweight title last year but issues experienced by his opponent in making weight put paid to that idea. On Saturday, though, the young Irishman finally got to feel the weight of a gold belt on his shoulder with the third-round submission of former champ Rahimov.

Starched the #1 ranked guy in Ukraine in his hometown to take my first world title @wwfc.ua, As I said there’s not a flyweight out there on my level. One by one I will take you all out

The win is a solid one for O’Driscoll. Rahimov went into the fight with a 7-1 professional record, as well as a 6-1 record in the amateur ranks, but failed to make it seven straight wins and surrendered his championship in the process.

27-year0-old O’Driscoll improves to 7-2 in a professional career which began in 2015 after extensive experience in the amateurs.