OSP will take the sport on the card vacated by Patrick Cummins. 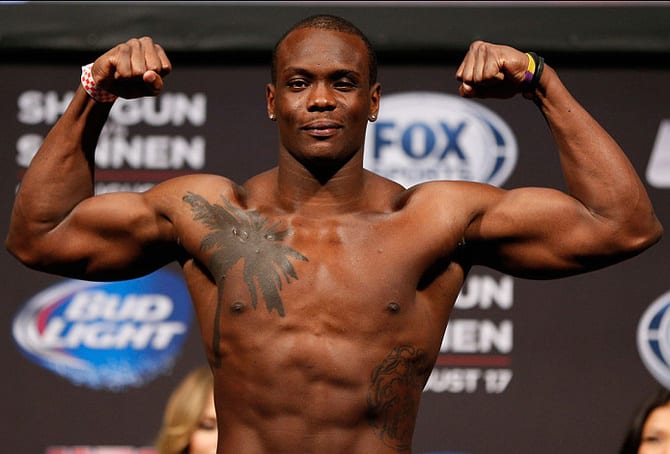 Ovince St. Preux will step in to replace Patrick Cummins against Corey Anderson at next month’s UFC 217 in New York City, after Cummins was forced to withdraw from the scheduled bout after being diagnosed with a staph infection.

St. Preux (21-10) campaigned to be the replacement on the November 4th card with a post on social media. Shortly thereafter Newsday.com reported that he had gotten his wish, though UFC officials have yet to officially confirm the contest.

OSP comes into the bout after a September win against Yushin Okami in the main event of UFC Fight Night 117 from Saitama, Japan. Prior to that, St. Preux earned a Von Flue Choke sumission of Marcos Rogerio de Lima last April after dropping a trio of bouts in succession to Volkan Oezdemir, Jimi Manuwa and Volkan Oezdemir.

Corey Anderson, meanwhile, a former winner of The Ultimate Fighter, lost to Manuwa in his most recent Octagon outing and has a 9-3 overall career record.

UFC 217 will be the UFC’s second event in Madison Square Garden, following last November’s historic debut in the world famous arena where Conor McGregor won his second UFC title by defeating Eddie Alvarez in the main event. This year’s card will be headlined once again by a trio of world title fights. In the main event, Michael Bisping will defend his middleweight title against the returning Georges St-Pierre. In the co-main event, Cody Garbrandt and T.J. Dillashaw will battle in a grudge match for the organisation’s bantamweight championship.

In the third title fight on the card, women’s strawweight champion Joanna Jędrzejczyk will defend her title against Rose Namajunas.