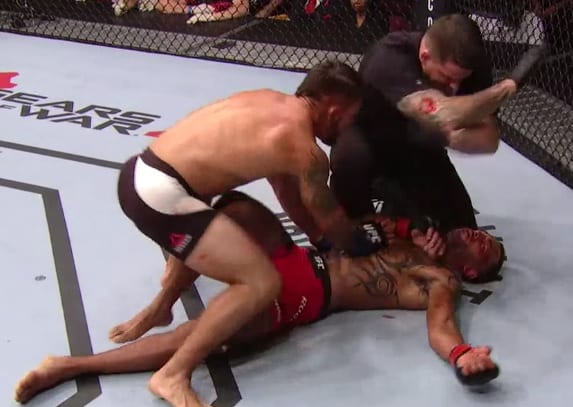 It was almost unanimously agreed that the new unified rules of mixed martial arts, introduced in January of this year, would erase some of the in-built blind spots that have manifested in the sport in recent times.

The new ruleset changed the definition 0f several rules, including what constitutes a grounded fighter and will implement new judging criteria, along with several more new penalties to be enforced and some techniques which had been considered fouls in the past no longer been seen as such.

However, some of the athletic commissions in the United States have been slow to adapt to the new changes, or haven’t yet passed the motion, and this has left mixed martial arts in the unenviable position of having slightly modified rule-sets depending on the state in which an event is taking place.

What was meant to clarify has only served to obfuscate.

In an interview with MMAJunkie, referee Marc Goddard gave his take on the roll-out of the new rules and how successful the implementation has been seven months down the line.

Interestingly, one of the changes is that it is now a foul to ‘reach’ or ‘paw’ out your hand open-fisted to measure distance or to keep an opponent at bay. This rule comes into effect to help minimise the risks of accidental, or otherwise, eye pokes.

As referee John McCarthy explained on the introduction of the modified rules: “In 2017 we’re going to start by eliminating some of the rules that have been fouls in the past. Those being first, as we look at it, heel kicks to the kidneys is now going to be legal in the sport of mixed martial arts.”

As for judging, McCarthy hopes that the newly introduced instructions will help in establishing a situation where judging becomes more regimented. 10-10 rounds, as well as 10-7 rounds, will now be more commonplace within mixed martial arts. Though, as McCarthy explains, a 10-7 round will be a lot less common as it is likely that the referee will have called a stop to the bout should that score be required.

Goddard also explained that in order for referees to adapt to the new rules, they must officiate as many matches as possible.