Ken Shamrock laughs at ‘BMF’ title: ‘You’re wearing gloves, you fight one time a night, every six months to a year’
Press enter to begin your search
MMA

Ken Shamrock laughs at ‘BMF’ title: ‘You’re wearing gloves, you fight one time a night, every six months to a year’

Ken Shamrock respects today’s fighters, he just thinks his era was made of different stuff. 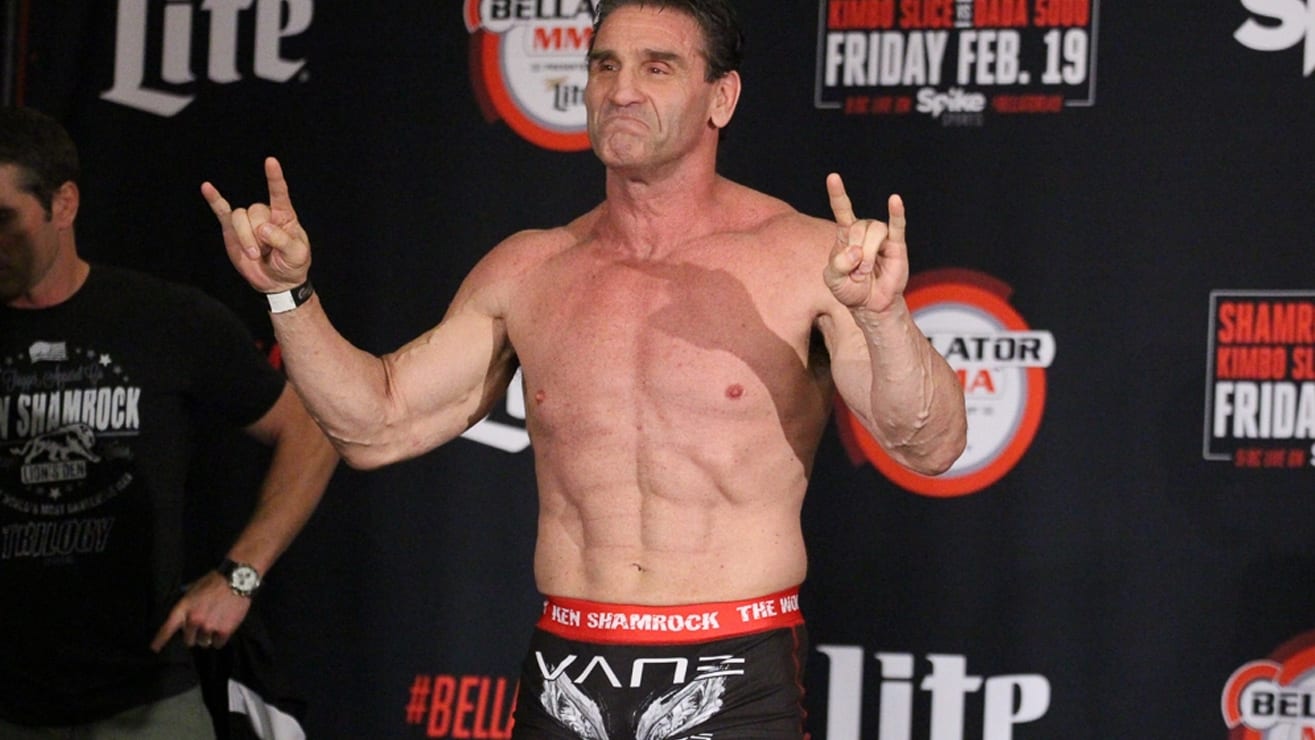 There’s no denying the men and women who step into the Octagon are exceptionally tough. Ask those who started the sport of mixed martial arts some two decades ago, however, and you’ll often come across the idea that back then, athletes were a different breed.

Names like Tank Abbot, Don Frye, and Ken Shamrock all blazed the trail for those who came later, and all of them have made comments about how modern day stars don’t realise how good they have it. Indeed, for Shamrock, who was one of the first ever stars in MMA, current UFC stars labeling themselves as tough is nearly laughable. And to create a title for the ‘baddest motherfucker’ actually is worthy of a chuckle.

“It’s funny to hear these guys talk about toughness and being tough and being bad,” Shamrock said, speaking to Ariel Helwani of ESPN recently. “It’s like, man, if they only knew what went through in those beginning days, with no training, there was no map of how to train. There were guys that would go to the park and get in fights with people in order to get training, real training in. You’ve seen a lot of guys that would just do a road tour. They’d drive from one end of California to the other end and they would stop at different places and do fights on these different promotions in the beginning days when there was promotions everywhere. They would drive across country just hitting every stop and fighting at them, just to get the training in.”

In Shamrock’s day, UFC events were one night tournaments with minimal rules. While that brutality did bring eyes onto the sport, the entire thing eventually had to change and modernise to keep the UFC and mixed martial arts around.

It was in those early days, Shamrock says, that the entire newness and freshness of the sport kept bringing up new puzzles that only the fighters who competed back then will appreciate.

“There was no map. There was no way of real training. Obviously, early on we were able to develop a way to do that but for most guys you used to hear stories like that all the time about how guys would go to the park and fight or they’d take fights anywhere just so they can actually get in and get a fight somewhere where they really knew what they were doing,” Shamrock said. “Because back in the day when I was over in Japan, before they even started the UFC, I couldn’t get anybody to train with me. I would go into karate schools and boxing schools, they were striking and you’d take them down and they’d be like ‘No, what are you talking about’ or I’d get a wrestler and say ‘Shoot on me, I’m not gonna knock you out but I’m gonna punch you.’ There was nobody to do that so I had to open a gym and slowly start training people.

“So for them to start talking about being a Bad MF, I just kinda laugh and go, oh my gosh, you guys are wearing four-ounce gloves, you fight one time a night, every six months to a year. Really? Come on.”