Soares suffered the injury during her MMA debut earlier this month. 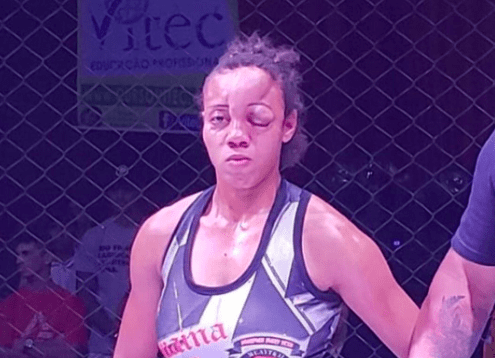 Per a report by Gullherme Cruz of MMA Fighting, Brazilian MMA fighter Janaina Soares is uninjured despite a grotesque hematoma suffered en route to a TKO loss in her mixed martial arts debut.

Soares, a 105-pounder with previous experience in muay thai, was bested by Vanessa Goncalves at Favela Kombat 30 earlier this month and an image showing a Soares with a massive swelling across her brow went viral in the days following.

Goncalves was awarded the win after Soares was unable to answer the bell before the third round having taken damage on the ground from a flurry of elbows.

So of all the hematoma’s ive seen in combat sports, this is probably number one! Vanessa Gonçalves def. Janaina Soares by TKO (doctor stoppage)! pic.twitter.com/Ezo10qklW9

Despite the horrific image Soares is uninjured, reports Cruz after discussing the matter with Scorpion Fight Team coach Lucas Chagas.

“She did exams the next day, her eyes are open already, and she suffered no injury in the skull,” Chagas explained. “It was swollen because of the elbows, but everything is fine.”

Soares will have another opportunity to claim her first MMA win this weekend when she faces Julie Mezabarba this Saturday at NCE 31 in Rio de Janeiro.