‘I’ll show you as the b*tch ass point fighter that you are’ – Justin Gaethje, James Vick engage in heated social media battle
Press enter to begin your search
MMA

‘I’ll show you as the b*tch ass point fighter that you are’ – Justin Gaethje, James Vick engage in heated social media battle

The war of words has begun ahead of the August 25 clash.

James Vick, currently in the midst of a 9-1 run in the UFC’s lightweight division since debuting with the organisation in 2013, has been campaigning for a high profile fight for some time now and owing to Al Iaquinta pulling out of a scheduled contest with Justin Gatheje, the 6 ft 3 in Texan has finally gotten his wish.

Vick and Gaethje will meet in the main event of the UFC’s August 25 card in Lincoln, Nebraska in a bout where neither fighter is expected to take a backward step — and the verbal sparring has already begun on social media.

As noted on Reddit Vick and Gaethje have opened a discourse on social media and it has gone down exactly as you might have imagined, with Gaethje accusing his opponent of being a ‘point fighter’ while Vick says that Gaethje will be cut from the UFC after what would be a third loss in a row after which he can go back to the “regional circuit and fight some tomato cans.”

See the back and forth below: 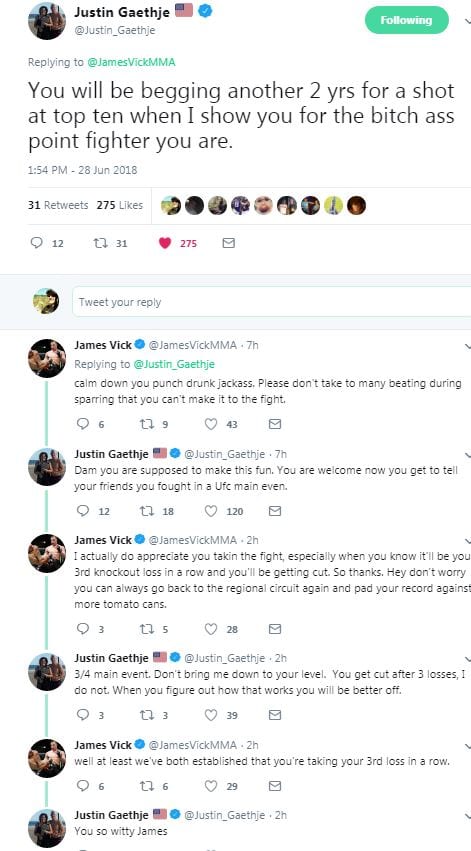