Holm isn’t ruling out a fight with Katie Taylor 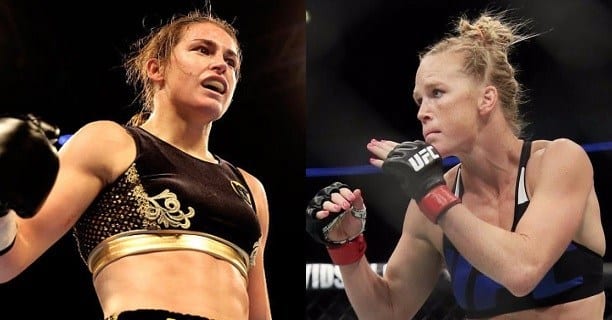 Former UFC champion Holly Holm is one of a very short list of fighters to have enjoyed success in both boxing and mixed martial arts, and the woman who first dethroned Ronda Rousey says that the door isn’t closed on her taking on the unbeaten Irish champion Katie Taylor in the boxing ring.

Prior to her transition to MMA talks took place for a fight between Holm and Taylor, with the issue again being raised just a few years ago as a potential possibility. Taylor’s career, though, took her in different directions and culminated in last Saturday’s historic showdown in Madison Square Garden with seven-weight champion Amanda Serrano.

Speaking after the fight, Holm said that she was incredibly impressed by the performances of both fighters — but isn’t ruling out one day stepping into the ring with the greatest female fighter in history.

“I’ll tell you what, they got out there and they knew that a lot of people were watching and they knew they had this big opportunity, being the main event at Madison Square Garden, and they showed up to fight,” Holm said to The MMA Hour, via MMA Fighting. “It’s always inspiring to watch the hard work these women put in and they go in there and they fight with passion too. It was a fun fight to watch. Definitely a close fight, which is good.

“You don’t ever want it to be this big awaited fight and then just one person getting schooled. I figured it would be a split decision, if anything. I knew it was going to be a really close battle, a back-and-forth fight. They’re both really good boxers. A little bit towards the end, they just started swinging, just slugging. And I guess when you’re in those later rounds, it’s like, ‘Let’s just go.’ I knew I would see back-and-forth, like a fight, but it was kind of even a little bit of a brawl at the end, just throwing.

“I feel like it was how the judging went, a split,” Holm added. “Serrano, especially in the later rounds pushing forward, but Taylor was landing more, moving and landing. The last round it’s kind of hard to tell because they both were just going. I wouldn’t have argued it either way. If it would have said split decision to Taylor or split decision to Serrano, I just feel like it was a close fight. A lot of times it depends on which eyes are watching it. Who is pushing forward, who is landing shots, how many compared to how many are power. There’s a lot of ways to look at a fight like that. There was a lot going on.”

In an alternate universe, it stands to reason that Holm might be speaking of Taylor in the context of her being a former opponent — something that the American was more than up for. And might still be.

“We had talked, Taylor and myself, before I wound up going to MMA. We had talked about a possible fight there,” Holm said. “I always want to do something that hasn’t been done. I always get super intrigued by things, and I fought at three weight divisions, ‘40, ‘47, and ‘54, and I never got to fight at ‘35. But I’ve done most of my MMA career at ‘35, and that’s what their fight was at. So it makes me like, ‘I want to go back in and show what I can do at a whole different weight class.’ I never even fought at that weight class when I was in boxing and I think I’m bigger and stronger than a lot of the 135ers, and I still have conditioning and I still have a lot of that ring experience behind me.

“It does intrigue me. A lot,” Holm said. “To the point where, before, I was like, ‘I’ll never box again,’ and I’m not saying that. There’s been a lot of people that have been able to transition back and forth, but nobody’s really been able to do it successfully, and that drives me. I want to show people I was able to come to MMA from boxing but I can also go back. It does get me excited.

“What gets me excited is if I had one [belt] on each shoulder,” Holm said. “Do it all.”