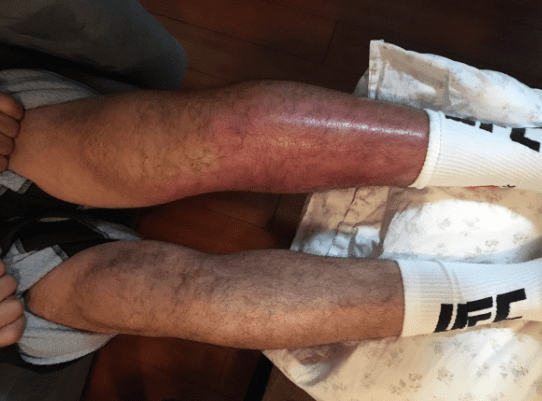 Last night at UFC 215, Gilbert Melendez re-affirmed that he might be one of the toughest men in mixed martial arts.

Facing off against Jeremy Stephens last night, Melendez was hit early on in round one with a devastating series of kicks to his calf. Eventually, the blows took made such an impact Melendez was left virtually unable to stand, hitting the canvas after every strike landed.

Still, such is Melendez grit, he managed to see the final bell. Today, however, his leg isn’t in much better shape.

Posting to Twitter, Keri Melendez (Gilbert’s wife) revealed that while Melendez is fine, his leg is looking slightly worse for wear.

“Everyone is asking about Gilbert’s leg,” she put. “Here is a pic today. He is doing A ok. Thank you to all for the support.”

Hey All. Everyone is asking about Gilbert's leg. Here is a pic today. He is doing A ok. Thank you to all for the support. We feel the love pic.twitter.com/VQpNj7JlTO

@GilbertMelendez 's a soldier. He's gonna heal up quick. Thankful there is no knee damage. Again, we thank everyone for the messages ❤ pic.twitter.com/309nZAO6JL