Germaine de Randamie says she found out she was no longer champion in the same way we did. 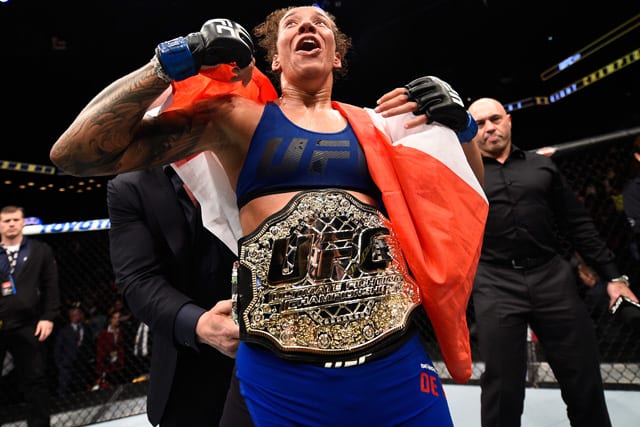 This morning the UFC stripped Germaine de Randamie of her women’s UFC featherweight title after her recent comments that she refused to face number one contender Cris Cyborg. And, according to the Dutchwoman, she found out through the media in just the same way as the fans.

The UFC released a statement this morning confirming recent reports that Cris Cyborg would meet Megan Anderson at UFC 214 on July 29. The promotion stated that de Randamie’s refusal to face Cyborg meant her keeping the title was no longer a viable option.

“UFC has informed Germaine de Randamie and her management team that she is being removed as the women’s featherweight champion due to her unwillingness to fight the No. 1 ranked contender, Cris ‘Cyborg’ Justino,” the UFC said in a statement. “Subsequently, top contender Justino will face newly signed Invicta FC featherweight champion Megan Anderson for the UFC women’s featherweight title in the co-main event of UFC® 214: CORMIER vs. JONES 2, July 29 in Anaheim, Calif.”

Now, de Randamie has taken to her own social media to release a statement, and says she is unaffected by the claims from fans that she was an unworthy champion.

“I hear you already think [I’m] scared,” she wrote on Instagram. “What a bad champion! A disgrace to the sport! [I] don’t deserve to be a champion! etc.. etc.. I see it all over. But regardless of what everyone thinks/do, I walk my own path. And you can agree or not.”

Germaine de Randamie has commented on the UFC stripping her of the 145lbs championship via her Instagram account. pic.twitter.com/9uHd4lKFLn