As he prepares for his comeback, Georges St-Pierre explains his temporary hiatus from MMA. 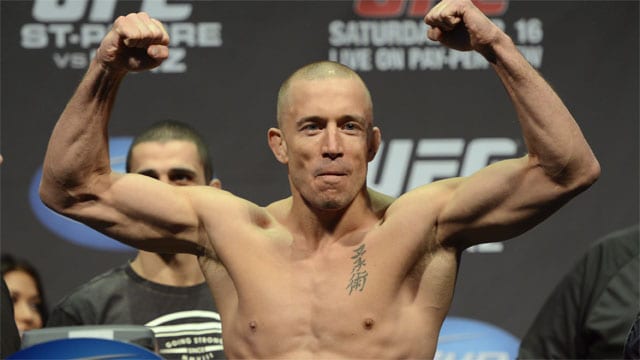 When he steps into the cage inside the world’s most famous arena, it will be just a week or so shy of four years since he last competed in the UFC — a successful welterweight title defence against Johny Hendricks at UFC 167. Shortly after that fight St-Pierre announced that he was taking leave from the sport, citing numerous shortcomings her perceived in the drug-testing infrastructure of the sport, as well as personal burnout from years of training and competing.

Now, as the 36-year-old Canadian legend prepares for his comeback he has elaborated on his reasons for stepping away.

As quoted by Newsday, the former 170-pound champion said: “When I left, it wasn’t because of damage. It was more mental. More anxiety, nervousness. I couldn’t sleep well. I felt like I was claustrophobic. Too much pressure.

“I had a problem at that time, too, a personal problem (when I walked away),” St-Pierre continued. “It’s like a bag of bricks that you carry that you don’t have time to empty your bag. It piled up on each other. Now I had time off, I had time to empty my bag. Now I come back light.”

With ring-rust cited as a debilitating factor post-layoff for so many fighters, St-Pierre remains confident that he still has what it takes to compete at championship level in the UFC.

“It’s always depending on how it’s going to happen. How I will feel. I have no desire to hang out in the sport too long like a lot of guys did in the past. A lot of great boxer, some of the greatest fighter as well, they hang out too long. I have no desire to do the same thing. If I come back, it’s because I believe you guys haven’t seen the best out of me yet.”