‘Do I need a last name like McGregor?’: Jon Jones has his say in public pay dispute with the UFC - MMA - TheMacLife
Press enter to begin your search
MMA

‘Do I need a last name like McGregor?’: Jon Jones has his say in public pay dispute with the UFC

Jones says he wants to fight Francis Ngannou – but only for the right price.

Last Saturday’s UFC 260 main event seemed to have delivered fight fans the tantalising Francis Ngannou vs. Jon Jones matchup that first became a possibility when Jones announced his decision to leave the 205-pound fold last year — but a few road blocks have emerged in the past couple of days.

Jones, the longtime former light heavyweight champion, says that he is more than willing to fight Ngannou for the right price but judging by his Twitter activity since Saturday, he is resistant to what he essentially says is a lowball offer from the UFC — and Jones used the example of the best-paid figure in MMA history to prove his case. 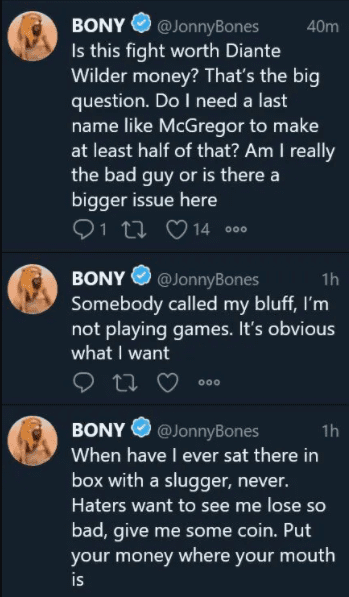 Jones has been embroiled in more than one pay dispute with the UFC throughout his tenure with the company and the latest very public staring contest between the two threatens to overshadow a fight which, by anyone’s standards, would be one of the more compelling heavyweight title matchups in history between the concussive power and the wily, never-say-die Jones.

Dana White and the UFC, though, appear more than happy to stick to their guns with White says at last weekend’s post-fight presser than if Jones doesn’t make himself available then another top contender like Derrick Lewis would be more than happy to slide into the title fight.

“Derrick Lewis is the fight to make, but if Jon Jones really wants that fight, and listen, it’s one thing to go out and tweet and say you want it, and I put on the weight and this and that – do you want the fight?” White said to the media, including TheMacLife, as transcribed by MMA Fighting. “I promise you we can call Derrick Lewis or one of these other heavyweights and they want the fight.