Dana White justifies move back to old weigh-in time: “The numbers don’t lie; more people are missing weight than ever before”
Press enter to begin your search
MMA

Dana White justifies move back to old weigh-in time: “The numbers don’t lie; more people are missing weight than ever before”

Dana White looks at UFC 225 as evidence why the weigh-ins should move back to the afternoon. 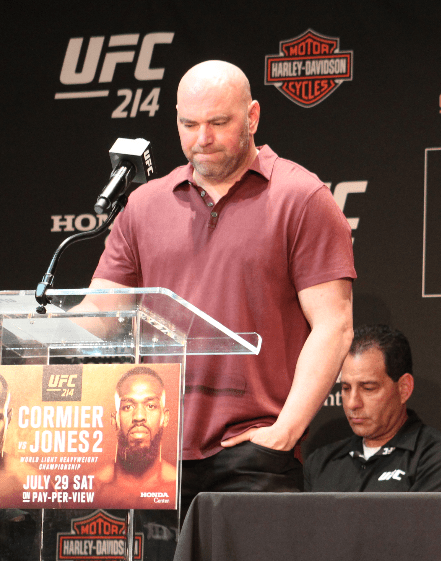 Earlier this week, UFC president Dana White said he would be looking to end the early morning weigh-ins fighters currently undertake, and switch back to an old system where the ceremonial weigh-ins in the afternoon are the official weigh-ins.

Despite a number of fighters taking to social media to lament the decision, with some seeming angered by the fault of a few affecting the many, today middleweight contender Yoel Romero came in too heavy for tomorrow’s UFC 225 main event, leaving White’s opinion reinforced.

Speaking with gathered media members following the UFC 225 ceremonial weigh-ins, White was asked about Romero’s mishap, and if that confirmed the UFC would be returning to the afternoon scales.

In a nutshell; absolutely.

“It can’t happen fast enough,” White said. “We are moving to the old weigh-in system. It’s going to happen. You know, there’s a couple people out there who say, ‘No, no, no.’ But the majority of the fighters want to go back 4 o’clock.”

Some had suggested fighters could be permitted to meet the old fashion in the middle, with perhaps official weigh-ins taking place at midday. According to White, that’s not happening.

“No, no hybrid. No whatever,” White said. “You’re not going to get the commission to show up twice. They’re going to show up once, it’ll be at 4 o’clock and that’s when they’ll weigh in.”

When White first made reference to a switch back earlier this week, a number of fighters took to their social media to complain about the decision. But White says in actuality, more fighters have told him they agree than not.

“The fighters talked to me, that’s how we ended up here,” he said. “So many people were coming to me asking if we could go back to 4 o’clock, that here we are.”

“I know Eddie Alvarez was very outspoken about saying, ‘These are the type of people who will never make weight, they’re undisciplined’ and things like that. And to a point, Eddie’s not wrong there. When it’s your job to make weight, you’re supposed to make weight. But we had a lot less of this when it was at 4 o’clock and I believe it will go down. A lot of fighters are asking us to move the weigh-ins.”

Proper weight cuts start months in advance not the week of the fight , We sign contacts wayyyy in advance and are told the requirements . If You miss Its Your Fucking Fault !!!!!!!

Not the structure, not the hot tubs , not the suanas, not the meal prep guys , not the UFC , not the plane ride . If You miss weight it’s All Your Fualt . Why are we blaming the system ??????? Please help me here guys

Please bossman @danawhite don’t get rid of the early Weigh inns. it won’t solve a thing . Your punishing the fighters who are accountable and responsible. #dontdoit

As for when the new (old) time for weigh-ins will be introduced is as yet unknown, with White noting that there will be some red tape to work through first. Clearly, however, the UFC boss believes it should be as soon as possible.