Dan Hooker says he and Dustin Poirier met in the hospital after their epic twenty-five-minute war on Saturday night, and they squashed any issues they previously had. 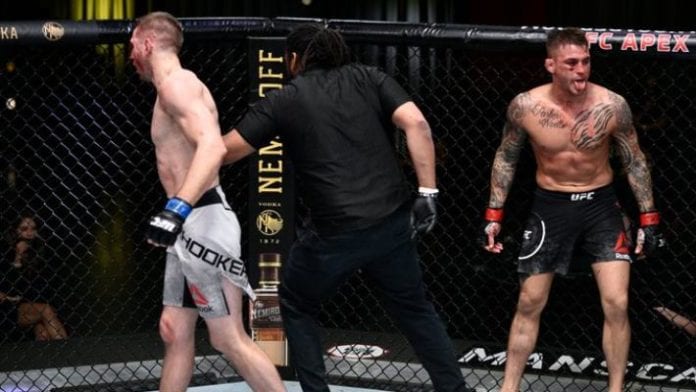 When Dustin Poirier walked across the Octagon to talk to Dan Hooker after their fight ended, it was clear some of the pre-contest talk had irked the Louisianna native.

Poirier referenced Hooker’s apparent interest in a Justin Gaethje fight, as well as told Hooker he was on “the right track” in something of a backhanded compliment. In the end, Hooker says the two solved their issues after a chance meeting post-fight at the hospital.

“We both went to the hospital, we ended up next to each other, but there was like a curtain in between us,” Hooker said, speaking to Submission Radio. “… And he’s like, ‘Dan, is that you?’ and then I hit him up about it. Because he was hitting me up about kind of looking through him and that’s what people were saying, I was looking past him. Talking about next opponents, but it’s what I said to him, ‘Bro, that’s who I was going to fight if I win, and I already knew who I wanna target if I’m coming off a loss’.

“That’s just the way I am. I just like to plan things. It’s not like I’m looking through him, it’s not that I went out there planning to lose, but if I lost I still know who I want to fight next to get back on track. I just explained it to him and then he said, ‘Yeah man I understand, I understand’, and then we just talked about our daughters. He’s got a young daughter as well, and we just wished each other all the best.

“You go 25-minutes with a man, and they can go the whole time and put on a show like that, it’s a level of respect that you don’t really have for anybody else to be honest.”