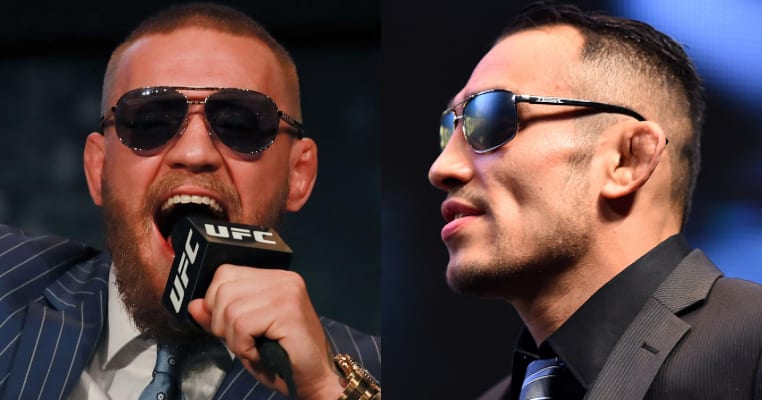 While the details of his next bout in the octagon remain to be confirmed, that hasn’t stopped Conor McGregor stoking the flames of his rivalries with Tony Ferguson and Max Holloway.

As we already reported, McGregor was active on social media following last weekend’s UFC 222 where he first tweeted of his respect for featherweight contender Frankie Edgar who was finished for the first time in his career by Brian Ortega. In his missive, McGregor revealed that Edgar has his respect and that he considers the New Jersey native to be a “true fighter’s fighter.”

However Holloway and Ferguson didn’t quite get the same level of affection from the UFC lightweight champion.

In his own tweet to Edgar Max Holloway paid tribute to the opponent he was scheduled to face next before injury derailed the UFC’s plans, though McGregor saw these words as hollow given the champion’s withdrawal from the bout.

Kid, you bounced. Leave it.

His retort to Ferguson was a little more on the nose. The interim UFC 155-pound champion posted a video on his social media of his hitting a speed bag with some odd-looking uppercuts, tagging McGregor in the post.

You are a sad bastard, mate.

Ferguson faces Khabib Nurmagomedov in just over a month’s time in New York with the winner of that bout expected to face McGregor in a lightweight world title bout later this year.