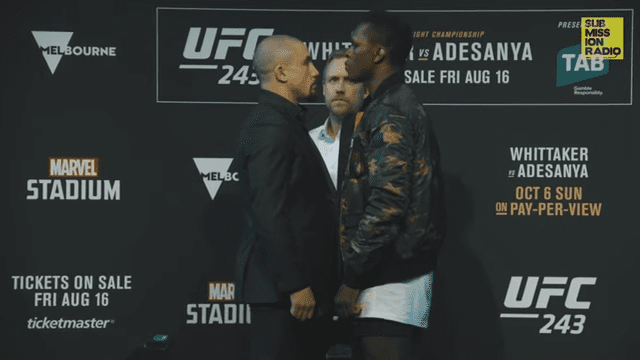 Robert Whittaker’s loss to Israel Adesanya in October 2019, in which he surrendered his UFC middleweight title, remains the only loss on the Australian’s record dating back to 2014 — and Chael Sonnen says that Whittaker was overawed by the title challenger that night.

The fight, which took place in Melbourne, Australia brought with it hometown anticipation and pressure and Sonnen, a veteran of several world title fights in his own right, says that he suspects that the moment got to Whittaker and could explain what many saw as an uncharacteristic performance from ‘The Reaper’.

“Whittaker was the one that walked out second. Something about it threw him off,” he added. “I could see it in his eyes in the walkout. There was a lot of pressure, 57,000 live people. It was still Whittaker who I believe as the one of the greatest strikers ever in the sport let alone in the division, against Adesanya who’s one of the great strikers ever within the division and the sport.

“The experience of Whittaker, the support of the hometown. Things are going to be great for Whittaker. It was anything but that. Whittaker was knocked out twice, twice the referee had to come in to stop the fight. Whittaker didn’t want a rematch. They tried to book it. Whittaker has fought 3 guys since. I know Robert Whittaker doesn’t want this. I’ve never competed with anyone in my life and lost and not wanted another fight.”

Since that night, Whittaker has won three straight fights against Derek Brunson, Jared Cannonier and Darren Till — but Sonnen still places the ‘favourite’ tag on the current champion.

“If Whittaker doesn’t look at the man in the mirror and know he’s the better guy tonight and he doesn’t have a plan B then he’s in trouble. Whittaker has what it takes to go all five rounds, there is a path to beat Adesanya. I’m putting the curse on Izzy.”