Nobody wants to mess around with Ryan Hall, or so it seems. 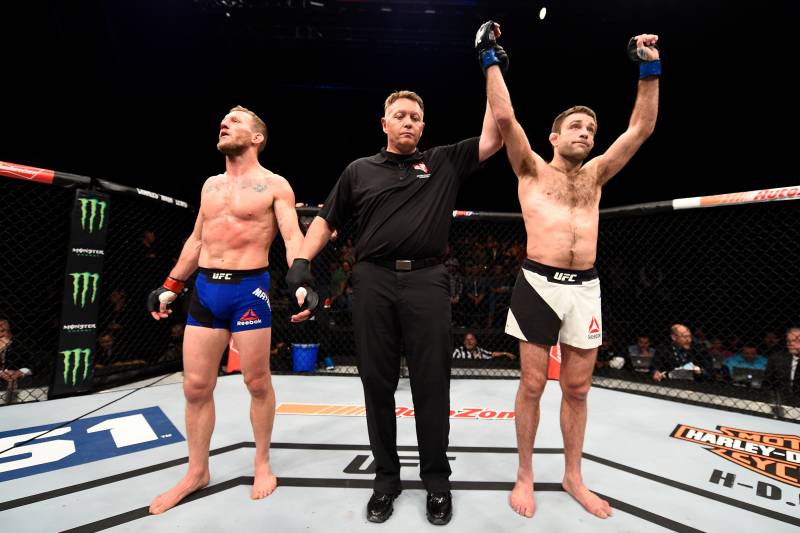 Whether he is neutralising a drunk patron at a restaurant (trust us, Google the video) or using his phenomenal ground skills to scythe through B.J. Penn’s defences in what remains the only submission loss of the Hawaiian’s career, Ryan Hall is not to be trifled with.

The soft-spoken Virginian possesses among the most robust ground skills in all of mixed martial arts. He predominantly uses an array of scissor takedowns to bring the fight to his world where, like a spider toying with its prey on a web, he uncurls various joint locks to coax a tap — or at least, that’s how it was against Penn.

Such is his talent on the ground and his steadfast desire to bring the fight to where he is strongest, Hall has found it difficult to nail down opponents. His last win, against Darren Elkins, came in July and speaking to ESPN’s Ariel Helwani (via MMA Junkie), he said that he has been turned down by a who’s-who of 145-pounders.

“It’s been a little bit of a struggle to find an opponent,” Hall said. “I’ve been directly turned down or been told they’re unavailable from 12 all the way down to 6, So that would be (Shane) Burgos, (Jose) Aldo, (Josh) Emmett, (Jeremy) Stephens, (Renato) Moicano, Frankie (Edgar), (Calvin) Kattar – pretty much everyone down to ‘Korean Zombie’ or Yair Rodriguez. He’s been unavailable, so it’s been a little bit tough to find an opponent.

“I was directly turned down by Josh Emmett. I was directly turned down by Renato Moicano. I guess there’s three guys in the division in Frankie Edgar, Jose Aldo and Renato Moicano, all of them very tough guys – and of course, Edgar and Aldo in particular, iconic figures – but they’re holding spots in the division that they’re not currently competing in, and it just seems like there’s a logjam that’s difficult to deal with.”

Hall says that he is targeting a May return, and he says he wants it to be against as tough an opponent as possible.

“I think it would be really cool to fight Brian Ortega,” Hall said of his preference. “He’s obviously a super tough guy, put on an excellent fight against Max Holloway, shows a great deal of durability, very tough guy. Great skills, has excellent wins over Frankie Edgar, over Cub Swanson, over Moicano. Tough on the feet, good on the ground, someone who would intentionally engage me on the ground I think, because he’s probably not afraid of other people either, so I feel like that would be fantastic.”