Gallagher is back on the winning track in what was a wonderful night for Irish MMA. 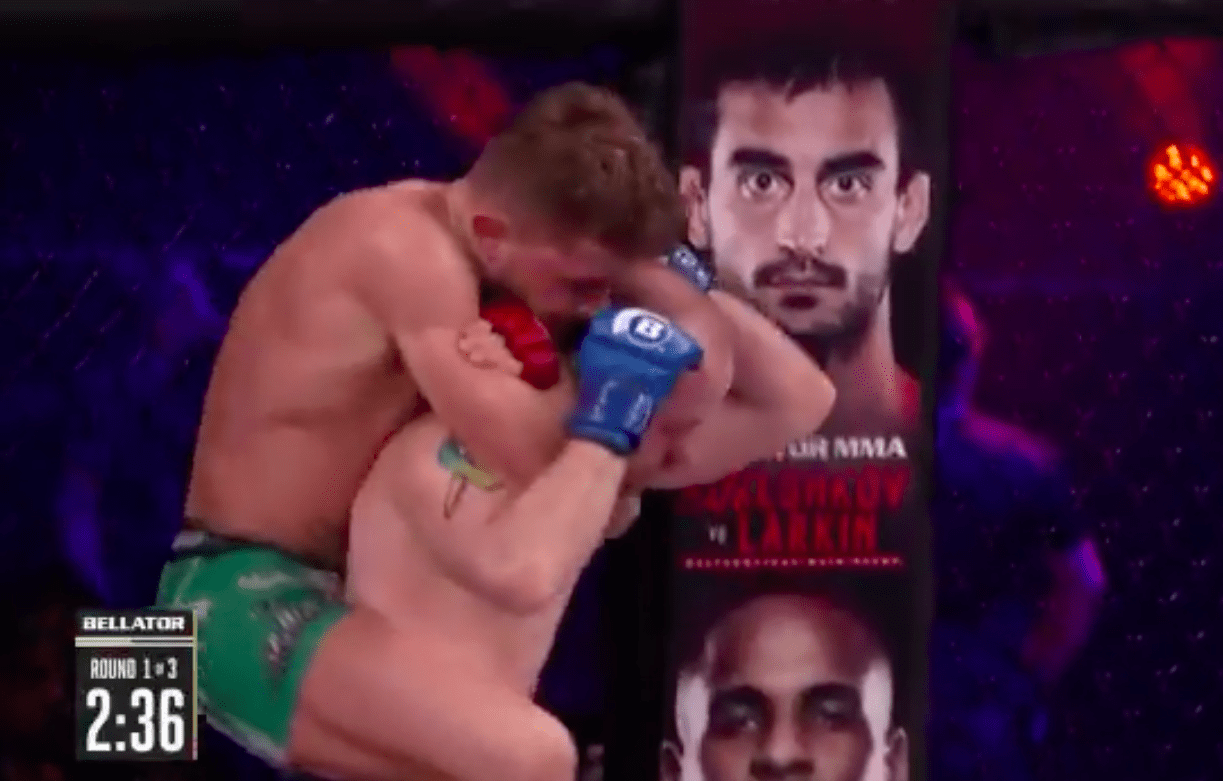 James Gallagher ever-growing reputation as one of the sport’s best young fighters continues as he looked in impressive form in a dominant performance against Steven Graham in front of frenzied Dublin crowd.

Gallagher never let his opponent get a foothold in the fight. Graham threw a body kick to open, which was caught by Gallagher and turned into a takedown. From there, this is James Gallagher’s world.

‘The Strabanimal’ worked to side position, then knee on belly and… well, there was a sense of inevitability to what was coming. Gallagher took his time looking for a choke, switching body triangle positions beautifully. Graham, a Jiu Jitsu brown belt, fought it off well but eventually the choke found its way under the American’s chin. That was all she wrote.

💪🇮🇪😳@StrabanimalMMA is victorious in his return to the Bellator cage with a rear naked choke at #Bellator217.

Watch the main event in the 🇺🇸 at 9/8c on @ParamountNet & simulcast on @DAZN_USA. pic.twitter.com/NgYWT2AsgI

“Coming off a big loss, everyone stood on me when i was down,” Gallagher said. “They counted me out and I fucking came back!”

In the evening’s co-main event, Myles Price was given the nod from the judges after a razor-close fight with Peter Queally. After one of this arena’s more remarkable entrances in its history soundtracked by The Cranberries, Queally cut a confident figure and clearly had the backing of the sold-out crowd.

Price employed a suffocating gameplan, pushing Queally to the cage at every opportunity. The SBG man countered on several opportunities and seemed to have the better of it on the feet, but Price scored a takedown late and busied himself with looking for a choke and, while it never arrived, it seemed to leave an impression on the judges who gave the win to Price via split decision.

Kiefer Crosbie improved his perfect professional record to 6-0 (2-0 Bellator) with a first round rear naked choke win against Daniel Olejniczak. Crosbie, who hails from the North Inner City area of Dublin, practically grew up in the shadow of the arena in which he has claimed his biggest professional mixed martial arts victory to date.

👊🍀🔥Dublin’s own @KieferCrosbie wins via RNC in his fourth appearance here at @3ArenaDublin.

Watch our #Bellator217 main card LIVE now on @SkySports in the 🇬🇧 & 🇮🇪.

Catch all of the action on our main card in the 🇺🇸 at 9/8c on @ParamountNet & simulcast on @DAZN_USA. pic.twitter.com/jmcznm2s0v

‘BDK’ has earned most of his victories by strikes thus far but, speaking to John McCarthy in his post-fight comments, Crosbie said that he was happy to show that he has many more tools in his arsenal than just his fists. Job very much done.

Richie Smullen, meanwhile, emerged practically unscathed in a one-sided decision win against Adam Gustab to open the card. Smullen showed a heavy top game for which Gustab had little answer, aside from a brief flurry early in a round which forced the Irishman to back away.

🍀👊@Richie_Smullen with the takedown early in round one!

Watch the #BellatorDublin main card LIVE now on @SkySports in the 🇬🇧 & 🇮🇪.

Main card kicks off in the 🇺🇸 at 9/8c on @ParamountNet & simulcast on @DAZN_USA. pic.twitter.com/KY14YhJHEI

From that point on, however, it was business as usual and the Arklow man eased to victory through 15 minutes, even dropping for a signature toehold late in the third. When the final bell rang, judges announced a 30-27 (x2) and 30-26 win for Smullen.

Charlie Ward scored a stunning left hand KO just over 30 seconds into his bout against Jamie Stephenson, sending his opponent tumbling to the canvas with the first punch he threw with any real intent. Check out the finish here.

Paul ‘Redser’ Redmond, the hugely popular Dublin fighter who was controversially omitted from the main card, won a close decision against English opponent Charlie Leary in a back and forth three-round battle.

🍀👊@RedserMMA goes 2 & 0 inside the Bellator cage with the W via unanimous decision at #Bellator217.

🇮🇪 Our #BellatorDublin prelims are LIVE now on our app 📲 https://t.co/HWRv6qdpna

Tune in to catch the prelims in the 🇺🇸at 6/5c. pic.twitter.com/dhNkTFSGfh

Leary appeared to have an advantage on the feet early before Redmond was able to assert his strong wrestling game. At one point, a rear naked choke victory seemed close for the Irishman but Leary persevered. The decision, though, was the correct one.

Ryan Curtis left it late into the first round to get a finish against Luis Gonzalez but the SBG Charleston man got the result he was looking for when referee Todd Anderson stopped the bout with seconds left in the first frame as Curtis rained down blows on Gonzalez as the raucous crowd in Dublin’s 3 Arena roared their approval.

🍀👊You do not want to be in the standup with @ChaosCurtis!

Afterwards Curtis asked Bellator to invest in the 125-pound weight class, saying that he could be Ireland’s next breakout star — and with a performance like the one displayed on Saturday night, it would be difficult to argue otherwise.

Curtis’ SBG Charleston stablemate Leah McCourt also picked up the second win of her professional career. Referee Kerry Hatley stopped the bout at the end of the first round after McCourt had opened a significant cut near her opponent Hatice Ozyurt’s eye.

Before that, Will Fleury earned a second round rear naked choke win against Shaun Taylor, Dylan Logan turned in a fantastic performance to beat Andrew Murphy by first round armbar while George Courtney beat Ian Cleary and Chris Duncan defeated Sam Slater.

Richard Kiely also scored a highlight reel left hand KO against Mickael Bucher to increase his professional record to 3-1, which you can see below.

👊🔥👊Big shot and a first round victory for @RichardKielyMMA at #BellatorDublin!

🇮🇪 Watch the prelims LIVE now on our app 📲 https://t.co/HWRv6qdpna

Tune in for our prelims in the 🇺🇸at 6/5c. pic.twitter.com/kFqC3LdaUh