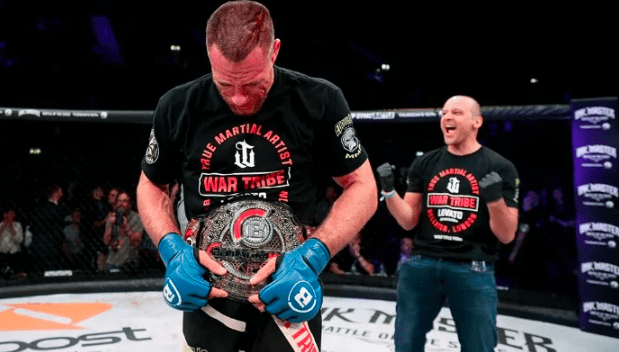 Lovato Jr. claimed the world title last June after he outpointed former champ Gegard Mousasi through five rounds in London but has since kept a relatively low profile within the promotion. He announced in January during an episode of Joe Rogan’s ‘The JRE MMA Show’ that he had been diagnosed with a possibly hereditary condition called cavernoma in which abnormal blood vessels form in the brain and spinal cord — something which could affect his ability to be granted a license to compete.

Last month, he told Rogan that: “I want to be healthy, whether I get to fight or not. In the meantime, I don’t want to hold up the division.”

Hold up the division he won’t. The promotion revealed today that Lovato Jr. is no longer the Bellator 185-pound champion, with Lovato Jr. himself releasing a statement.

“My journey with my team and family to become the Bellator middleweight world champion was incredible and something I will cherish forever,” he said. “I dreamed of having a long reign as champion, but sometimes life has another plan.

#FBF to our moment @bellatormma 🏆 Now you can really imagine how I felt… • Anything is possible when you have the right people around you. I am blessed to have the love & guidance of the greatest martial artists & family in the 🌎 I believe in them & they believe in me. I am a warrior, because I’m surrounded by warriors & I know what I’m fighting for. Surround yourself with the people who make you great. • @deeana6 @evolucaothai @xanderibeirojj @frohlich_mma @matrixgrappling @greenstrengthiv @ribeirojiujitsu @cameronshayne @andredida • #AnythingIsPossible #Believe #Fight #NeverGiveUp #Warrior #TrueMartialArtist #DreamsDoComeTrue #SurroundedByGreatness #SurroundedByLove #TeamLovato #EvolucaoThai #RibeiroJiuJitsu #PickloWrestling #Budokon @wartribegear @onnit @resiliencecbd

“Bellator has been very supportive during this difficult process, a situation that has never really happened before in our sport. I know the division must move on while I am on the sidelines and I wish everyone great fights on their way to that belt. I will be working to come back if it is possible – and if not, life will continue to be amazing for me and I look forward to working with Bellator in another fashion.”

There was no further information on his medical status which is, of course, a personal matter and there is no indication as to whether Lovato Jr. will continue to pursue his BJJ career.

“This has been an incredibly challenging time for Lovato Jr., his team and his family at home,” Bellator president, Scott Coker, said. “He is a true warrior of the sport and I cannot say enough about him for making such a difficult decision. His health is the priority for us and we will continue to work with him on addressing the next steps in his career.”

Bellator also stated that plans for the future of their middleweight title will be announced in the coming days.