McKee will take on the undefeated Khamzat Chimaev on just six days notice. 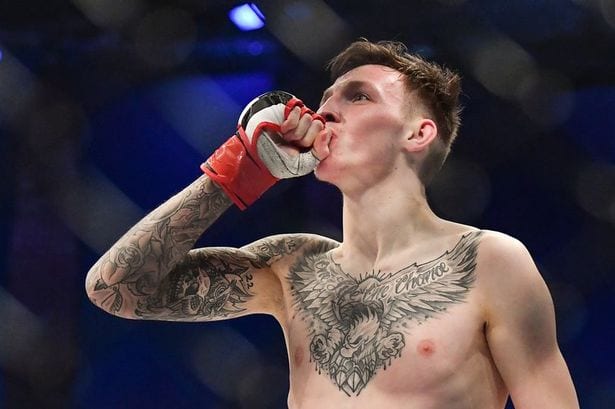 Eat your heart out Jorge Masvidal.

Just days after the UFC welterweight took on a title fight against Kamaru Usman on just six days notice, Cage Warriors star Rhys McKee will repeat the feat on July 25 after he was drafted in by the UFC to fight impressive grappler Khamzat Chimaev on the final ‘Fight Island’ card this weekend.

McKee, who had been tipped to make his UFC debut at the promotion’s now-cancelled event in Dublin in August, will now make his debut for the promotion against the 7-0 Swedish fighter of Russian origin Chimaev who impressed with a second round submission win against John Phillips last week. It will mark his second UFC appearance in 10 days — an all-time record within the company.

Footage of McKee being informed of his fight by Cage Warriors boss Graham Boylan was released to the web, with the 24-year-old Irishman clearly overjoyed by the news.

Watch the moment Cage Warriors President @GrahamBoylan tells @RhysMcKee he’s signed with the UFC, and is flying to #UFCFightIsland.

McKee becomes the latest Cage Warriors graduate to make his debut with the UFC and will follow in the footsteps of the likes of Conor McGregor and Michael Bisping to have made similar moves in the past. The Ballymena native is 10-2-1 in his pro career to date, with all of his wins coming inside the distance. He is the only fighter to hold a win over another Cage Warriors standout, Jai Herbert, who will also make his debut for the UFC on the same card.

It will be a tough ask for McKee given Chimaev’s oppressive grappling style but the Irishman is a known finisher and comfortable in all facets of mixed martial arts and could present several problems to Chimae, who will drop to 170-pounds for the fight just days after defeating Phillips in the middleweight division.