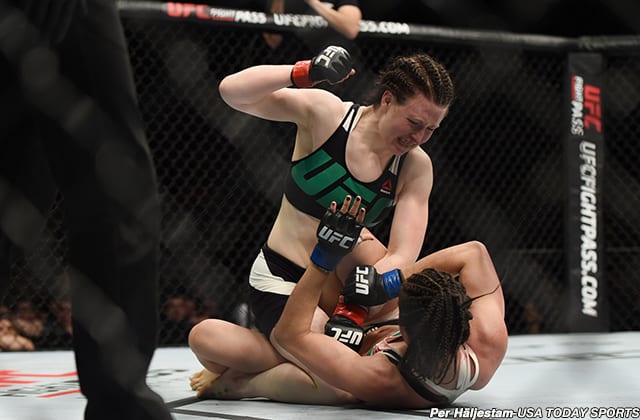 The UFC announced early Tuesday morning that Aisling Daly vs Michelle Waterson has been added to the UFC Fight Night: Hamburg card. The bout will be contested over three rounds at 115-pounds.

Both fighters have been missing from action for some time now.

Waterson with a record of 13 wins and 4 losses, will be returning to action for the first time in over year. “The Karate Hottie” was successful in her debut last July, winning by submission in the third round.

Daly with a record of 16 wins and 6 losses is coming off a unanimous decision victory over Ericka Almeida in October. “Ais the Bash” is 2-1 inside the Octagon, and has vowed to put on a “relentless” performance in Germany.

Daly tweeted to her fans yesterday evening: “Very excited for this. Ready to rock Hamburg with Zombie & a relentless performance.”

Thanks for the tweets! ☺ Very excited for this. Ready to rock Hamburg with Zombie&a relentless performance! #focused pic.twitter.com/9vsRWFshPT

It was Daly’s emotional walkout that stole the show last October in Dublin Ireland, as both Daly and the Irish crowd in attendance sang along to ‘Zombie’ by the Cranberries, sending shivers down the spines of the captivated audience worldwide.

Daly will be looking to put on a similar performance on September 3, at the Barclaycard Arena in Hamburg, Germany.