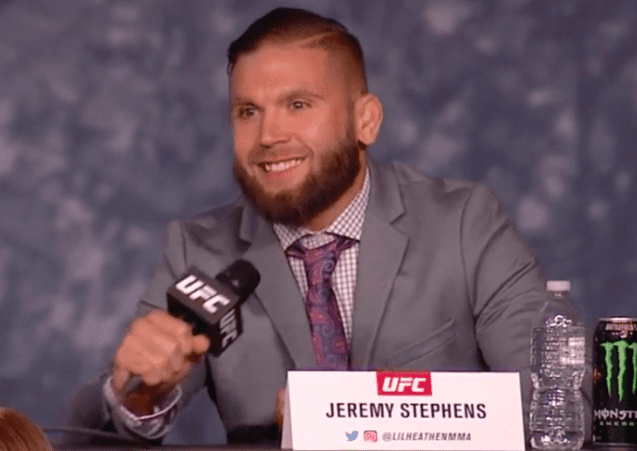 The self-proclaimed hardest-hitting puncher at 145-pounds, a man who when he knocks people out they don’t f*cking move, Jeremy Stephens, is no longer with the UFC.

Numerous reports online have indicated that Stephens, who made his UFC debut back in May 2007, has left the company after more than 30 fights, bringing to a close a six-fight run in which he didn’t claim any victories — in fights which came against VERY high level competition in the likes of Jose Aldo, Yair Rodriguez, Zabit Magomedsharipov, Calvin Kattar and, most recently, Mateusz Gamrot last July in what proved to be his final Octagon appearance.

It has been reported that Stephens is set to join the PFL.

‘Lil Heathen is the fourth most-active fighter in UFC history and also ranks near the top of the list of the most knockdowns (18), decisions (16) and holds wins over the likes of Rafael Dos Anjos, Jose Emmett, Choi Doo-Ho, Gilbert Melendez, Renan Barao an Darren Elkins, among others.

Of course, Stephens is also known for his back-and-forth with Conor McGregor at a press conference to promote UFC 205 several years ago, which you can re-watch courtesy of MMA Fighting below: