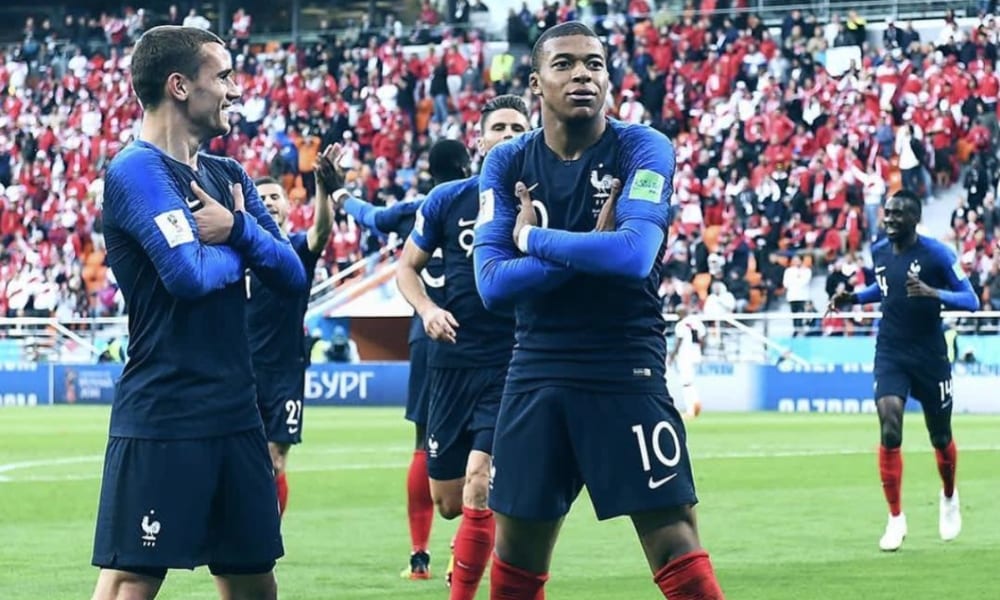 Striker Kylian Mbappe became the first teenager to score twice in a World Cup game since Pele in 1958 as France defeated Argentina 4-3 to progress to the quarter-finals in Russia.

But the French fans didn’t have to wait long for them to find the back of the net, as Mbappe set on a blistering run right through the heart of the Argentinian defence that was only halted by a desperate, cynical challenge by Marcos Rojo, who dragged the teenage striker to the turf in the penalty area.

Antoine Griezmann then stepped up and calmly sent Armani the wrong way from the spot to put France ahead on 13 minutes.

Mbappe’s pace very nearly brought France a second spot-kick as he latched onto a sublime Paul Pogba pass. But another desperate foul, this time from Nicolas Tagliafico, came just a foot outside the penalty area, and Pogba blasted the resulting free-kick high over the crossbar.

France were on top and cruising, but Argentina drew level with one of the goals of the tournament by Angel Di Maria, who picked up the ball 30 yards from goal and hit a rocket of a shot that flew into the top right-hand corner of the net. It was a stunning effort, and gave Argentina a goal their first-half performance barely merited.

This is so satisfying to watch. What a hit by Di Maria. 🇦🇷 pic.twitter.com/apVcB5zEfa

Things got even better for Argentina right at the start of the second half, as Lionel Messi’s effort was deflected past Hugo Lloris by Argentina defender Gabriel Mercado. But the rollercoaster-like nature of the game saw the momentum swing back towards France once again.

Griezmann should have scored after nipping in between Argentina substitute Federico Fazio and Armani only to fire wide. But remarkably the VAR officials failed to spot Fazio’s clear shirt-pull on the striker as he was shaping to shoot.

But when France’s Lucas Hernandez burst down the left flank and crossed, few were expecting what was to come next.

Somehow the cross missed everyone in the Argentina box. But the ball sat up perfectly for French defender Benjamin Pavard, whose brilliant volley from 25 yards found the top corner for yet another Goal of the Tournament contender.

I could watch this all day. Incredible. 🇫🇷😍pic.twitter.com/zDND548hwo

Then two goals from Mbappe in the space of four minutes put the game out of reach.

Another Hernandez cross from the left caused havoc in the Argentinian box. Mbappe then took possession, made space and fired hard and low through the legs of Armani to put France 3-2 up.

And then the French made it four with a beautiful end-to-end move that finished with Olivier Giroud’s perfectly-weighted pass for Mbappe, who fired low past Armani for his second of the game.

Substitute Sergio Aguero nodded home in stoppage time to give Argentina late hope, but the French managed to stave off some late Argentinian pressure to seal the 4-3 win their performance richly deserved.

It was a remarkable game and a stark contrast in performance from the French side’s rather more disjointed early-tournament displays.

But now, with their young striker in form and the team looking cohesive and confident, the French look like they might be tough to stop.