Exclusive: Leonard Ellerbe — “This increases the probability of someone getting knocked out”
Press enter to begin your search
Sports

Exclusive: Leonard Ellerbe — “This increases the probability of someone getting knocked out”

Leonard Ellerbe says that the 8-ounce glove ruling has put the likelihood of a knockout to the forefront. 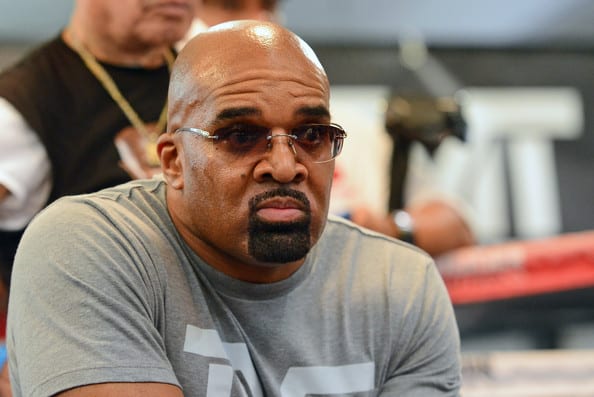 While it’s no surprise that Conor McGregor and his team are happy with the NSAC’s ruling to make the Conor McGregor vs. Floyd Mayweather fight gloves 8-ounces, some fans could be forgiven for think Mayweather wouldn’t be so happy.

According to Mayweather Promotion CEO Leonard Ellerbe, however, that’s not the case. In fact, Mayweather and his team are just as happy as the McGregor side.

“I’m very, very pleased with the decision by the commission today,” Ellerbe said, speaking with TheMacLife.com. “They’re always a very fair commission, they always have the best officials. I’m always very pleased with any and everything that they do. They’re very fair, and that’s all you can ask for.”

Some fans have questioned the undefeated boxer’s motives for wanting smaller gloves, suggesting that McGregor’s chances drastically go up with the lack of defensive coverage. For Ellerbe, he believes that’s not the case, instead citing a matter of comfort for both fighters.

“There’s always a risk every time you step into the ring. You never know what’s going to happen. That’s why you prepare, give it your best effort. [Floyd’s] had a terrific training camp. He’s looking forward to fighting in the 8-oz gloves.