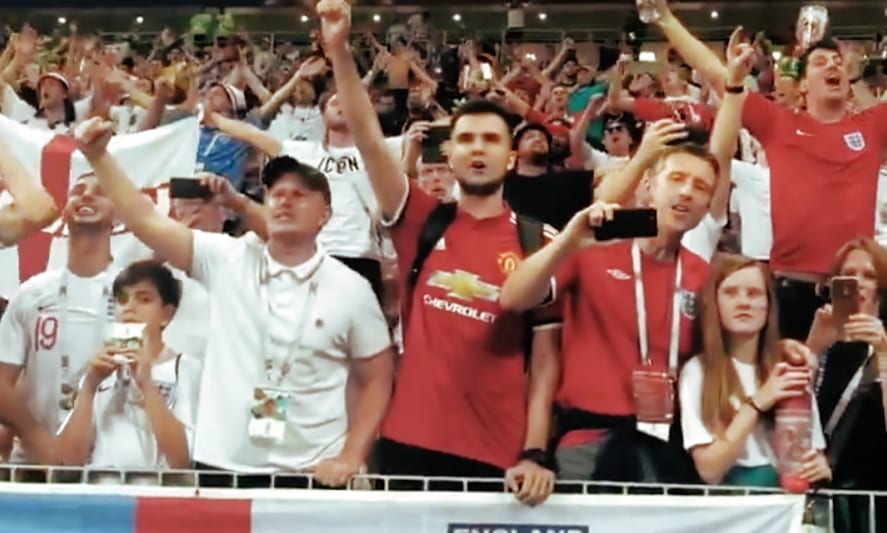 England bowed out of the 2018 World Cup in Russia with a final message as they serenaded their heroes with an Oasis classic.

England took the lead through Kieran Trippier’s superb free-kick, but were pegged back by Ivan Perisic’s volley. And Mario Mandzukic’s extra-time strike finally sank English hopes as Croatia knocked out the Three Lions and advanced to Sunday’s World Cup Final against France.

But for England’s fans their semi-final exit was still cause for celebration as Gareth Southgate’s side gave England and their supporters a team to be proud of once again.

And the England fans that stayed behind after the game joined together to serenade their crestfallen players with an appropriate message after their remarkable run to the semis – Oasis’ ‘Don’t Look Back In Anger’.

The last time England were eliminated from a major tournament their fans booed them from the field, jeering them with chants of “You’re not fit to wear the shirt” after their 2-1 defeat to Iceland in the last 16 of the European Championships.

But this summer was different. Bars, clubs and hastily-created fan parks were packed with supporters as footage of England fans going berserk was screened around the world as a nation began to fall back in love with their national team again.

Want to know what a couple of hundred thousand pounds’ worth of beer looks like if it’s all thrown into the air at the same time? You’re welcome. #ENG #ENGCRO #WorldCup pic.twitter.com/Ls0IQyrVK2

Southgate’s new-look England side exceeded all expectations by reaching the semi-finals, as the initially-ironic catchphrase of “it’s coming home” turned into a message of real belief that the Three Lions could actually go all the way.

Ultimately, it wasn’t to be for England as they bowed out against Croatia. But the reception the fans gave the team after the game showed that, unlike two years earlier at the Euros, this England side certainly was fit to wear the shirt.

And, as well as their hearty rendition of ‘Don’t Look Back In Anger’, the fans reserved a special chant for Southgate as they saluted the England boss with their specially-adapted version of Atomic Kitten’s ‘Whole Again’.

Full video of @GarethSouthgate’s long-awaited emergence from the tunnel – precisely 70 minutes after the final whistle. The @England fans had been chanting for him non-stop while he was inside conducting all his media duties. #mixedemotions #Eng pic.twitter.com/u1BO08uJAe

But, before they head back home, England have one more match to play as they face fellow eliminated semi-finalists Belgium in the 3rd/4th Place Play-Off on Saturday.