Floyd Mayweather made various demands of Conor McGregor in regards to boxing gloves — but what are the differences? 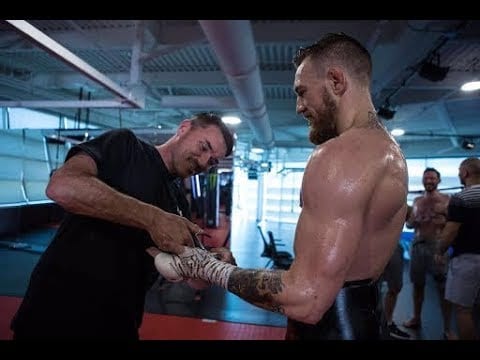 What difference can a pair of gloves make? Well, if you’ve been paying attention to the lead up to Conor McGregor vs. Floyd Mayweather, then you’d realise a fair bit.

Much has been made of the gloves both men will be wearing this Saturday night, with the weight even being lowered from 10-ounce to 8-ounces. While that particular aspect of the hand tools has been changed, there’s been one constant throughout the negotiations. Mayweather has enforced his usual rule of no horse or and Mexican-style gloves being used.

But what difference is there? TheMacLife.com spoke with Conor McGregor’s cut man Tommy McCormack, who went into detail on the slight changes with different materials.

“When boxing gloves were first used, they used to be stuffed with horse hair,” McCormack said. “So what happened is you could actually manipulate the horsehair, you could push it and bring your knuckles out through the horse hair. To stop that, they developed the foam padding what we’re used to now. That’s become the standard, but certain places still use the horsehair glove.

“There’s no actual rules against them, they’re still considered a legal boxing glove. Now, they’re not good for your hands, because you’re effectively only working with the wrap. As it gets wet, it moves around a lot more. I remember as an amateur we used to wear them, and you’d get hit, it could be the tenth fight with the same gloves and they’d get wetter and wetter. You’d get hit with the searing pain and the smell. They stunk.

“Then we have what is called the ‘Mexican’ glove,” he continued. “Everlast do a glove called the MX, and basically the padding in that is very, very little. [So Floyd said] no MX glove, and no horse hair. It’s basically he wants.. you tear up someones face real bad with that stuff. The horse hair wouldn’t be used as much now, but the Everlast MX glove is still used. It’s a legal glove, but Floyd won’t have any of it.”

“You have someone like Conor in a horse hair or Mexican glove? That’s a no-no. You don’t want him hitting you with them.”

Now, both McGregor and Mayweather will be using standard foam padded gloves. We’ll have to wait until Saturday night to see if it matters.