Conor McGregor to unsatisfied fighters: “Where would you be if I wasn’t here?”
Press enter to begin your search
McGregorMMASports

Conor McGregor to unsatisfied fighters: “Where would you be if I wasn’t here?”

Conor McGregor’s title shot against Eddie Alvarez may be a fan favourite, but… 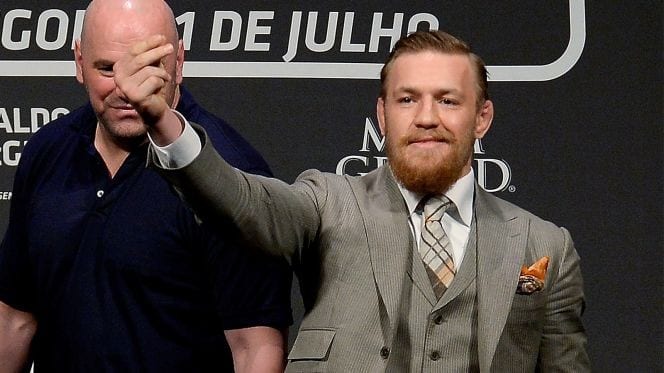 Conor McGregor’s title shot against Eddie Alvarez may be a fan favourite, but it wasn’t put together without ruffling a few of their fellow fighter’s feathers.

After the UFC 205 headliner was announced and the press-conference was over, interim featherweight champion Jose Aldo immediately made it known he wished to retire. Following him, lightweight contender Khabib Nurmagomedov said publicly that after feeling used by the UFC that if his next fight wasn’t for the title, he would leave the organisation.

As far as McGregor himself is concerned, he believes his fellow pugilists have more things about which to be happy than disgruntled.

“Tell me one time that crying and moaning, tell me one time that’s good for progression. It’s not,” McGregor said, speaking to Sports Illustrated. “Where would you be if I wasn’t here? Be grateful that you’re even in the conversation.””

Instead, McGregor thinks those who are discontented should push on and stay on task, as he was forced to do when recovering from an ACL injury in 2013.

“Keep your head down, keep working, stay focused, stay positive, that’s the way to go forward,” McGregor said. “Not crying, moaning, complaining. I can’t engage in that. I wish them well, but I’m on something different here.”